Bartlett Sher’s concept for his production of Rossini’s Le Comte Ory is a theatre within a theatre setting with scruffy bewigged footmen types operating old fashioned stage machinery.  Throw in costume design that seems to cross the slutty middle ages with My Little Pony and one gets a production that would probably appeal to the average seven year old girl.  Fortunately the singing and acting is really rather fine with splendid vocal contributions from Juan Diego Flórez, Joyce DiDonato and Diana Damrau well backed up by the likes of Stéphane Degout and Susanne Resmark and it’s Maurizio Benini and the Met orchestra so no problems there either.  To be honest they are hamming it up for all its worth but that doesn’t seem unreasonable in this very silly piece.  The second act trio which features some mind boggling gender bending with the three principals swapping partners faster than Liz Taylor swapped husbands is hilarious. 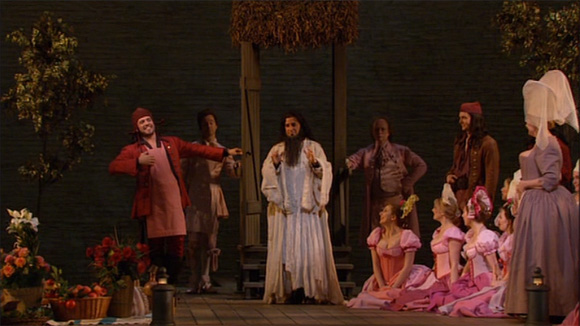 The video direction is by Gary Halvorson and it’s typical of his work with lots of close ups and a marked fondness for the rabbit cam.  Sound (DTS and PCM stereo) is distinctly better than when I saw this broadcast in HD, even if the voices are balanced a bit too far forward, and picture quality is decent.  The extras are the usual HD broadcast fare this time featuring Renée Fleming who seems increasingly to dominate these things; presumably because she;s humourless and stays on script, unlike, say, Nathalie Dessay or Deb Voigt who are much more entertaining.  Documentation is minimal being largely a self-regarding puff for the Met.  Subtitle options are English, French, German, Italian and Spanish.

Despite the reservations I have about aspects of this disk it’s probably the one to get (but see below).  The only competition is a 1997 Glyndebourne effort and, pork products aside, this Met version is well sung and funny and if one is to rely on heaving bosoms for effect Ms. Damrau’s is a pretty good bet.

ETA: June 23rd 2019 – This is now available on Blu-ray at a very good price.  There’s also more competition now including a very good version from the Opéra Comique.