Despite also featuring William Christie, Les Arts Florissants and François Roussillon, the 2004 Châtelet production of Rameau’s Les Paladins could hardly be more different from the recording of Lully’s Atys that I reviewed yesterday.  The work is based on Orlando Furioso and is an utterly anarchic parody of pretty much everything that Rameau had previously written.  It was considered shocking in its day.  The production by José Montalvo with choreographic help from Dominique Hervieu is completely mad and tremendous fun.

The basic concept seems to be based around bande dessinée.  The sets are line drawings and animations with video projections going on almost continously.  Often the action is presented on two or three levels simultaneously mirroring the form of a comic strip.  Dance is continuous.  The traditional alternation between sung scenes and danced scenes is abolished and often dancers double up the singers.  The dancers, drawn from the Centre Choréographique de Créteil et du Val-de-Marne and the Compagnie Montalvo-Hervieu are extraordinary and encompass a range of dance styles from classical ballet to break dancing.  This piece is certainly the first where I have seen a dancer on a treadmill in point shoes! 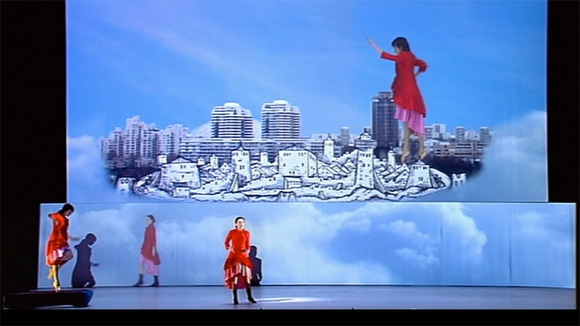 The video projections are wild.  One duet is sung to a background of twitching bunny noses.  There are trampolining figures in full baroque gear.  Animals of all shapes and sizes abound; giant chickens, lions, tigers, camels, horses, weird birds.  During the “Furies” scene in Act 3, the characters’ heads transform into snakes.  At one point a naked woman is sitting on a lion’s head.  And so on!  Somehow this all manages to stay synched with the live singers and dancers and the orchestra.

The singers are terrific.  The part of the imprisoned young lady Argie is played by the lovely Stéphanie d’Oustrac who sings and moves fantastically.  She also looks much better in red booty shorts than panniers.  She is well partnered by Topi Lehtipuu as Atis.  he has a gorgeous voice and is a really good dancer.  Sandrine Piau is wonderfully flirtatious and silly as the maid Nérine.  René Schirrer is solid as the “old fogey” Anselme and if he isn’t quite as mobile as the younger singers he still acquits himself very well in the acting department.  There’s an utterly brilliant performance by Laurent Naouri as the gaoler Orcan.  Obviously he’s a great singer.  I’ve seen him sing fabulously in works like Pelléas et Mélisande.  But here it’s his physical acting that steals the show.  He’s a great mover and a wonderful command of facial expression in a way that’s very funny and totally French.  Rounding out the ensemble is a very pretty performance by François Piolino as the gender ambivalent fairy who seduces Anselme.  The extent to which the singers interact with the dancers and the physical demands placed on them in this production are extreme.  It’s the absolute opposite of “park and bark”. 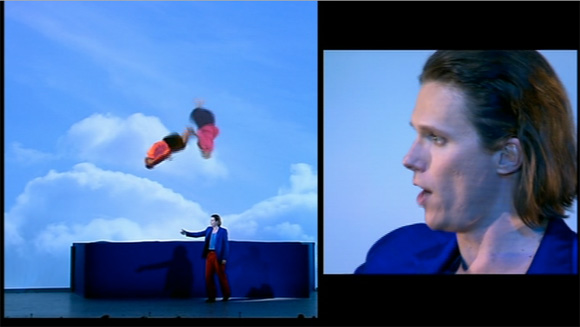 Somehow, in the middle of all this, William Christie and Les Arts Florissants produce a fascinating rendering of a wild and woolly score.  They produce some very strange and uncourtly sounds at times and I see from the booklet that there are two musette (a kind of bagpipes) players listed in the band.  There’s so much going on on stage here that one could almost forget the band but that would be most unfair.

The video direction is by François Roussillon and it’s rather different from any of his other efforts that I’ve seen.  Typically he takes a fairly detached view showing us the action pretty much as the theatre audience sees it and I like that approach a lot.  Here he is much more activist and uses split screen with two, and even sometimes three, panes rather a lot.  Normally this approach would drive me to distraction but here it works rather well to reinforce the comic strip element of the production.   The DTS surround sound is really good.  The stereo track sounded fine on the ‘phones too.  The picture is very decent for DVD with just a touch of motion blur.  The visual richness of this does make one wish that it had been recorded a few years later to facilitate a Blu-ray release though.  There’s a good film called Baroque that Rocks! by Reiner Moritz as a bonus.  It’s  a good example of a “making of” feature and well worth a look.  There’s also an essay by Moritz in the booklet along with the text of Lafontaine’s Le Petit Chien.  The disks have English, French, Italian, German and Spanish subtitles.

I really think Rameau would love this production as much as most of his contemporaries and, I dare say, the stuffier modern critics, would hate it.  I think it’s a wonderful celebration of life and love written by a genius right at the end of his life and splendidly brought to life here.

10 thoughts on “Can’t get no Atisfaction”