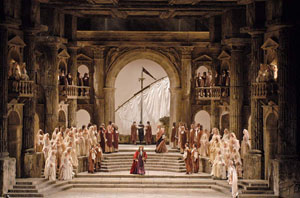 Today’s MetHD broadcast was Mozart’s last, and arguably best, opera La Clemenza di Tito.  J-P Ponnelle’s production has been around for a while and offers nothing to offend traditionalists.  There’s not a baked potato, muscle suit or child sacrifice in sight.  The set, maybe more Italian Renaissance than Imperial Rome is elegant, undistracting and very singer friendly.  The costumes are a rather eclectic mix of late 17th century and Republican Rome with a bit of Lady Capulet thrown in but only the black number with the big panniers that Vitellia gets in Act 2 would excite much comment.  Direction then focuses rather on the characters and their relationships.

The drama is pretty well presented,  Giuseppe Filianoti’s Tito does come off as a bit of a bumptious head prefect type and there’s a touch of cured pork product about Barbara Frittoli’s Vitellia but that’s hard to avoid.  Lucy Crowe’s Servilia and Kete Lindsey’s Annio are more developed and we get a truly tormented Sesto from Elĩna Garanča.  Oren Gradus isn’t half bad in the unthankful role of Publio either.  The singing is uniformly good to excellent with Garanča again the stand out.  Crowe and Lindsey though do a wonderful job on Ah perdona, il primo affetto which allowed me to confirm that the new bionic eyes will do real tears.  The Met chorus and orchestra do a first rate “big Mozart” job and if HIP specialist Harry Bicket in the pit tried to inject any HIP sensibility it wasn’t apparent to me.

For once, in a MetHD broadcast, the video direction was pretty good.  The name of the video director scrolled past me too fast to catch (ETA: Barbara Willis Sweete) but she managed a decent balance of scene setting shots and not too close ups.  Also for once the sound where I was wasn’t turned up to 11 and it all sounded quite musical.

Overall, this was the best MetHD broadcast I’ve been to in quite a while.

3 thoughts on “Not a potato in sight”