The problem with reviewing Doris Dörrie’s 2002 Berlin production of Così fan tutte is that pretty much everything that can be said about it already has been.  It’s like trying to write about Willy Decker’s “red dress” Traviata.  So I’ll try and be brief and to the point.  On the surface the idea is a bit outlandish.  Mozart and da Ponte’s satire about sexual fidelity is updated to the 1970s though to me, who grew up in the 70s, it seems much more like the 60s.  That said, it works.  It’s lively, funny, musically top notch and the presentation on DVD is very decent. 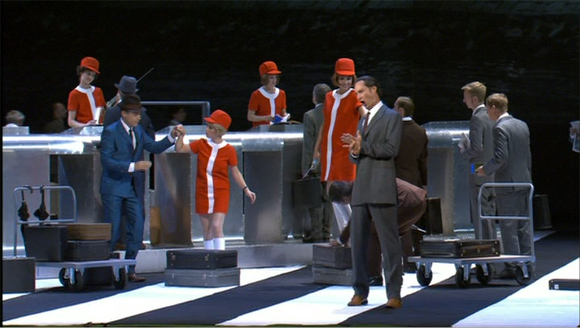 The best discussion of the nuances of the production I’ve seen is over at The Earworm.  My own take is that it’s a very effective exploration of the commoditization of women, the sexual double standard and the essential absurdity of insisting on monogamy as “the” standard for human behaviour.  How much of this da Ponte or Mozart intended is anyone’s guess.  It’s also very, very funny.  I particularly like the satirization of “woo woo” medicine and the hippie obsession with things Indian.

The production opens in an airport where the female airline staff are wearing the sort of gear that was considered suitable back then.  The boys are wearing suits and hats and carry umbrellas. which is a touch retro even by 70s standards.  The girls are properly domestic.  They wear dresses and wigs and when their men are drafted we see Fiordiligi frantically trying to iron a shirt for Guglielmo while Dorabella makes Ferrando a sandwich.  There’s also a real “women as property” schtick as the boys write their initials in marker on the girls’ bras.  When the boys come back as “Albanians” they are dressed as hippies.  From then on it’s all about the girls being persuaded to lose their inhibitions and embrace “freedom”. There are any number of other things that would bear further analysis and discussion including Fiordiligi being tied to a tree during (a very impressive performance of) “Come scoglio”, the boys physically overpowering the girls during the poison scene and Guglielmo’s flaunting of Dorabella’s bra, to the very end where Don Alfonso and Despina apparently about to get off on the kitchen counter when pretty much everybody else seems to have given up on love or sex or something.  I realise that this makes the production sound very “Regie” but I don’t think it is.  It’s more a romp with lots to think about which is just fine with me.

All the principals are wonderful singers and actors.  Dorothea Röschmann is the only one I’d seen much of before but the others are very good.  I’d certainly like to see much more of Katharina Kammerloher; Dorabella here, and Daniela Bruera; who is a very effective Despina, if not as bonkers hilarious as Patricia Petitbon.  There’s nothing wrong with the guys either.  Roman Trekel is very effective as a younger than canonical Don Alfonso and Hanno Müller-Brachmann and Werner Güra as the sisters’ lovers both sing and act very well indeed.  Daniel Barenboim seems to be going for a rather heavy, mid 20th century take on Mozart but it doesn’t drag and it’s well structured.

The video direction, for once, is very decent,  Michael Beyer does a good job of balancing close ups while letting us see what the stage looks like and he isn’t self indulgent.  The picture is pretty good modern DVD but not as good as recent HD releases.  The same can be said for the Dolby 5.1 sound which is good but nothing to write home about.  Oddly, the packaging promises DTS, Dolby surround and PCM stereo but the disk only has Dolby 5.1 and Dolby 2.0.  There are no extras on the disk and documentation is standard.  Subtitle options are English, French, German, Italian and Spanish.  The English subtitles are, let’s say, idiomatic rather than literal.

All in all this must be one of the top recommendations for this work on video though buyers who want crinolines and wigs might prefer the recent Glyndebourne version.

5 thoughts on “Chill out dude”