This is another of those Arthaus Blu-ray disks that’s sold at a silly cheap price as a carrier for two hours of trailers from the Arthaus catalogue.  That said, it’s very high quality indeed.  GIlbert Deflo’s production is, in the end, quite conventional though with careful and effective Personenregie.  He does trick us a bit at the start.  The scene opens with what is, apparently, a rather louche 16th century court entertainment/orgy.  There are bare breasted women and dancers of both sexes dressed as Satanic imps.  Everyone is in period costume including Rigoletto with jester hat, bells etc.  The scene is, perhaps, what we expect.  The “ladies” are very receptive to the duke’s advances.  The men are resentful but not actively so.  Then in comes Monterone in mid 19th century dress to denounce the proceedings and we, perhaps slowly, realise that this is a costume party.  From there on there’s nothing very tricksy.  The story gets told effectively and straightforwardly.  We have been pulled, effortlessly, from the time of the libretto to the time of first performance and the parallels are drawn.

The performances are really very good indeed.  Piotr Beczala looks and sounds every inch the duke.  He’s good looking, a good actor and a splendidly idiomatic singer.  Ldeo Nucci is even more impressive in the title role.  He may be pushing it a bit vocally (I think he was 65 when this was recorded) but he totally inhabits the part and gives us a vulnerable, frightened, vengeful Rigoletto who is wholly human in a rather terrifying way,  Elena Mosuc as Gilda is not that great in the acting department but she sings like an angel, if perhaps a rather dark one by Gilda standards.  Great work too from the other roles especially Laszlo Polgar’s suave Sparafucile and Katharina Peetz’ decorative Maddalena.  Nello santi pulls things together most satisfactorily with the help of the Zürich Opera orchestra and choir.

Felix Breisach is pleasantly unobtrusive as video director.  My only beef is his use of close ups during the ballet scenes in Act 1.  When there are a number of dancers on stage we really need to see the overall picture.  Technically this is good modern HD/Blu-ray.  The picture is 1080i and the sound is vivid and exact DTS-HD Master Audio 7.1,  Documenation is vry basic but there iare 130 minutes of highlights from other Arthaus productions on the disk.  Subtitles are English, French, German, Spanish, Italian and Korean.

This is a very satisfactory and technically excellent Rigoletto.  It must be a candidate for best available video version.  At eight bucks or so it’s a steal. 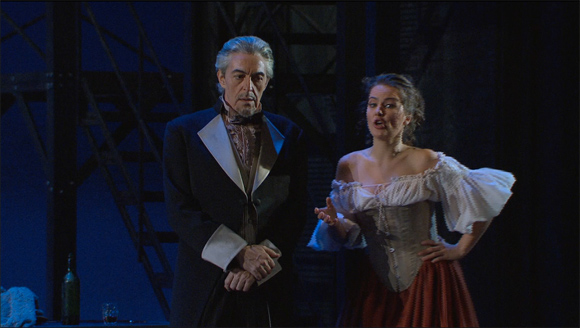 1 thought on “Rigoletto in Zürich”