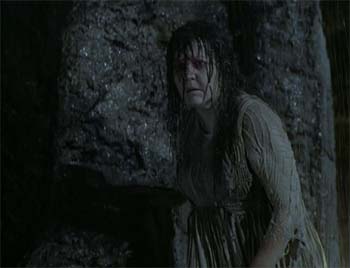 OK, I have shamelessly stolen the title of this post from the DVD booklet because it’s just a perfect description of Götz Friedrich’s 1981 film version of Strauss’ Elektra.  It’s one of those lip-synched films where the soundtrack is recorded in the studio and then the filming is synched to the sound track.  Mercifully the singers are also the actors.  I hate it when they use body doubles.

The production, aptly described in the booklet as “luridly impressionistic”,  takes place on a set built in an old steam locomotive factory in Vienna.  There’s a lot of rain, mist, dirt and blood.  It looks like a documentary about the Western Front only more claustrophobic.  When Clytemnestra appears everything is lit red, there are really gory animal sacrifices, bare breasts and a febrile, decadent tone reminiscent of Friedrich’s earlier film of Salome.  The actors are dressed/made up in the same vein.  Leonie Rysanek’s Elektra is dishevelled with wet, ratty hair, Astrid Varnay’s Clytemnestra looks like an over made up poisonous toad, Dietrich Fischer-Dieskau’s Orest hides behind a sinister full face helmet and so on.  I think Friedrich and his design team perfectly capture the mood of the piece and the singer/actors back it up with committed and skilful acting.

Musically this is very fine.  The then 87 year old Karl Böhm conducted in his penultimate recording effort just a few months before his death.  The accompanying documentary shows how much care he took in crafting the piece and how positively the Vienna Philharmonic and the singers reacted to his direction.  There are some very fine performances vocally.  I was struck by the beauty of Rysanek’s voice.  I don’t really expect Elektra to sound “beautiful” but here there is some gorgeous tone colour.  Varnay isn’t as beautiful but she is characterful and there’s a good Chrysothemis from Catarina Ligendza.  Fischer-Diskau’s Orest is gorgeously sung too with a lieder singer’s attention to diction and text.  The massive orchestra sounds really good too.

The DVD is pretty good.  The picture is standard DVD quality which is OK for a film with a fairly soft focus feel anyway.  The sound was recorded in stereo but is also available here in AMSI II created DTS 5.1.  Either way it’s at least CD quality.  As one might expect with a film the voices are balanced fairly far forward relative to the orchestra, which works fine for a film.  There are English, German, French, Spanish and Chinese subtitles and a trilingual booklet with a synopsis and a useful essay.  There is a huge bonus in a second disk with a 90 minute documentary by Norbert Beilharz on the making of the film.  It’s absolutely worth watching especially for the opportunity to see Böhm rehearsing.

This one’s a keeper.

3 thoughts on “Fear and loathing in Mycenae”