Having now had a chance to watch and review all seven currently available video recordings of Peter Grimes I thought I might do a summary of the strengths and weaknesses of each. All of them have some merit and I doubt that there would be consensus on a “winner”. Anyway, here goes…

This is an essential historical document with both composer and the creator of the role involved. The production is straightforward and naturalistic. The sound and video quality is surprisingly good for the period. It does, though, leave one with the feeling that there is more to the role of Grimes than Pears finds.

Also a historical landmark being the first major production where Grimes wasn’t sung by Peter Pears. It has the excellent Heather Harper as Ellen Orford. The production is quite dull and very dimly lit. Vickers’ Grimes is controversial. In places he sounds fantastic and in others sorely taxed. His acting is oddly stilted. Norman Bailey fails to convince as Balstrode.  Sound and picture quality are OK.

This is the production with most sense of the sea as a character brought out through innovative use of video projection. Langridge’s Grimes is intense, convincing and beautifully sung. Alan Opie is a very strong Balstrode. Unfortunately the orchestra and chorus aren’t up to rival versions and all aspects of the DVD; video direction, sound quality and picture quality are rather poor.

This is a very fine and thought provoking production with any number of magical moments. Ventris is a first class Grimes combining power and sensitivity and the supporting performances all have merit, save perhaps for Alfred Muff’s sub-par Balstrode. The orchestra and chorus are quite superb. The performance gets a thoroughly sympathetic treatment on DVD with good video directing backed up by quite excellent sound and picture quality.

This is a rather dull and dark production given a very eccentric treatment by the video director. Dean Griffey is a lyrical and sympathetic Grimes well backed up by the supporting cast, especially Anthony Michaels-Moore as Balstrode and Teddy Tahu-Rhodes as Ned Keene. The orchestra and chorus are excellent and Runnicles is fairly convincing though the first act drags a bit. The sound and picture quality is excellent. 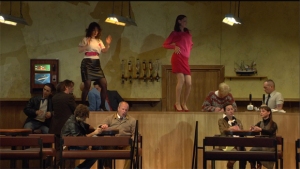 Richard Jones’ production, updated to the 1980s, is quirky. John Graham-Hall is quite lyrical as Grimes but slips into pseudo speech a lot. Susan Gritton fails to convince as Ellen Orford. The supporting cast, the orchestra and the conducting are first rate but the chorus is decidedly sub-par. The Blu-ray sound and picture outclasses all previous versions but, overall, this recording fails to convince.

This film is a record of the unique production staged on Aldeburgh beach by Tim Albery and filmed by Margaret Williams. It’s highly atmospheric and features a brilliant performance by Alan Oke but conditions were not ideal for the singers and musically this cannot match the best available recordings from the theatre.