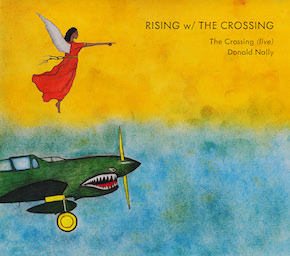 As I understand it the genesis of this recent CD from Philadelphia choir The Crossing and their conductor Donald Nally was members emailing each other clips of recordings from live concerts to keep their morale up during lockdown.  I guess in that respect it’s got something in common with this show.  No surprise then that the album is quite eclectic.  There’s around seventy minutes of music with twelve tracks in all.

It’s all good stuff but certain tracks stood out for me.  The first is David Lang’s protect yourself from infection which sets instructions from the Philadelphia authorities during the Spanish flu epidemic; “Avoid people who are coughing or sneezing” etc.  This is set relatively low and straightforwardly with the names of the victims weaving over and under the main line.  It’s a bit grim but very interesting.

Also by Lang are two excerpts from his the national anthems.  This is a multi-part work setting the rather banal sentiments that seem to be common to national anthems (so no “sang impur”).  Here the main text is sung by low voices with the higher voices weaving fragments over the line like a sort of descant.  There’s instrumental accompaniment here from the International Contemporary Ensemble (string quartet plus bass).

There are two parts too of Buxtehude’s Membra Jesu nostra marking a rare foray into non contemporary rep.  This sounds every bit as good as choirs that specialise in renaissance and baroque rep.  Accompaniment here is by Quicksilver (string quartet, organ and theorbo).

I also liked Ērik Ešenvalds’ Earth Teach Me Quiet (with John Green on keyboards and Edward Babcock on marimba) which is, perhaps predictably, meditative and rather lovely and Santa Ratniece’s setting of Ainu prayers Horo Horo Hata Hata. It’s very weird and quite disturbing with what sound like animal noises.

The tracks were all recorded live at various venues in the Philadelphia area and they are all clear and detailed. The album is available as a physical CD or in MP3 or FLAC (CD quality and 24 bit).  Il listened to the hi-res version.  There’s a comprehensive booklet (paper and digital) with full texts etc.

If you want to check out some of these tracks, and a lot more, there’s a wealth of good stuff on the choir’s Youtube channel, often with rather cute graphics.