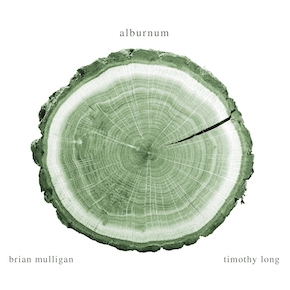 Alburnum is a record of contemporary American art song from baritone Brian Mulligan (Torontonians may remember him as Enrico in the COC’s 2013 Lucia di Lammermoor) and pianist Timothy Long.  There are two substantial pieces; each about 26 minutes long.  The first is Walden by Gregory Spears and it sets four prose extracts from Thoreau’s work with an extremely minimalist piano accompaniment.  I’m not really sure about turning prose into song and I’m not a huge Thoreau fan.  Perhaps if I were I would have found this more interesting.  It’s pleasant enough; it’s tonal and somewhat melodic and Mulligan has a pleasant voice but I wasn’t excited.

Songs from the Plays by Mason Bates I found more interesting.  The texts, by Kenneth Koch, are from seven “imaginary plays” like “They Say Prince Hamlet has Found a Southern Isle”.  They are whimsical with much more going on in the piano part and a vocal line that is quite varied including some interesting quick fire work.  It’s all essentially tonal and i think one would readily recognize it as American art song but it doesn’t sound (mercifully) like slightly intellectualized Cole Porter!

Sandwiched between the two is a short song by Missy Mazzoli setting an excerpt from Walt Whitman’s “As Long As We Live”.  It’s got a super minimalist piano part and a declamatory vocal line.  I would not have guessed Mazzoli in a month of Sundays.

The performances are nuanced and Mulligan’s diction is exemplary so there’s little need for the full texts that are supplied in the booklet, which does though contain a lot of useful information about the songs.  The recording is just fine and was made at Abeshouse Studios in Pelham, NY in 2020.  It’s available as a physical CD or digitally in MP3 and FLAC (CD quality and hi-res) formats.  I listened to the CD quality version.

So, a bit of a change of pace from Michael Hersch or Bekah Simms and illustrative of just how broad the category of “contemporary music” is right now.