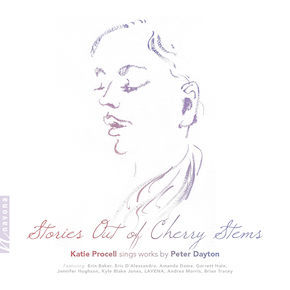 Stories Out of Cherry Stems is a recording of four works for soprano and various accompaniments written by American composer Peter Dayton for soprano Katie Procell.  There four works are:

This is clever and sophisticated music.  The accompanying instruments are well matched to their texts and the moods range from very playful to really rather dark.  The use of the voice too is challenging.  The sung vocal line has a wide range and often awkward intervals.  There are significant unaccompanied passages and a fair bit of spoken text.  Ms. Procell navigates the different demands with great skill.  I could go on at greater length but I’d mostly be needlessly duplicating Peter Wheeler’s excellent notes in the documentation accompanying the album (which even includes scores).

The album was recorded in Baltimore in the summer of 2021 and the version I listened to (96kHz/24 bit stereo digital files) sounds crystal clear and well balanced.  It’s only available digitally in either the hi-res format I listened to or MP3.

All in all, this is a really interesting album of very well crafted music by a young composer and the performances are excellent (full credits in the documentation).

All the details plus how to get hold of the album are here.