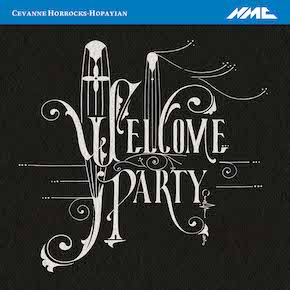 Welcome Party is a new record of music by British-Armenian composer Cevanne Horrocks-Hopayian.  Much of it is inspired by her residency with the LSO at 575 Wandsworth Road.  That house, now a National Trust property, was the home of Kenyan born polymath and poet Khadambi Asalache, who decorated it with his own wood carvings and murals.  Asalache’s poetry provides the texts for several pieces and others are inspired directly by the house and its contents.  The house is also a factor in the composer’s visual scores which sometimes use visual elements in the house to shape the music and inspire the improvisatory passages.  COVID looms large on the album too; from personal tragedy to the conditions under which many of the recordings were made.

Muted Lines is inspired by an Armenian poem of exile which speaks of “unsingable songs” but calls on us to “sing songs”.  It’s scored for vocals (the composer), saxophone, drum kit and electronics and it builds up repetitions of the text in widely varying moods, often in cool jazz style, evoking both sadness and hope.  It’s moving.

The title track, Welcome Party, is a kind of high energy danse macabre for chamber ensemble that riffs off a piece we shall come across later.

The Cave Painter and Cave Painting takes a poem of Asalache’s about how art emerges, given patience, from its source and sets it first as spoken word over electronics followed by a piece for violin, viola and bass clarinet created by resampling and remixing the reading back into the room at 575 where it was read until only pure sounds remain.

Swallows and Nightingales is a piece for voice (Cevanne’s sister Ziazan) and string quintet that uses text fragments to evoke birdsong in a sort of duel between the gregarious swallow and the lonely and threatened nightingale.

In The Ladies Ziazan, a most accomplished and versatile singer, evokes Bessie Smith to a high energy modern jazz backing which is strikingly different from the cool jazz elements of Muted Lines.

In A Poet and Inkwells Ziazan reads Asalache’s A Poet before launching into a complex, improvised piece that mixes “found sounds” from Asalache’s impressive collection of vintage glass and metal inkwells with improvisations guided by a score that combines the musical stave with a tracing of some of Asalache’s fretwork.  It’s really intriguing.

Ser (“love in Armenian) is an unaccompanied choral piece, sung by the choir of Girton College, that’s a rather beautiful dialogue between tension and openness.

Walls and Ways is an intriguing piece.  The text is an Asalache poem about a young man returning to his home village in Kenya after studying at Oxford and “finding home is not where you left it”.  It’s a rather stark example of something that every migrant knows.  Here Ziazan reads the text over an accompaniment of clarinet, bass clarinet and found sounds.

Lullabye between two is a piece that started off as an improvisation created by Cevanne as she waited for the ambulance to take her aunt to hospital where she wold die of COVID-19.  It’s arranged here as a vocalise for the Girton choir and is, as one would expect of a lullabye, simple, repetitive and rather beautiful.  It’s also the source of the main theme in Welcome Party.

There’s also a fun bonus track; Cassette (early sketches) which uses elements from Cevanne’s “aural notebook”, her voice, the mbira from 575 and the Girton choir as body percussion.

Performances are by various combinations of the the sisters, the Girton choir and members of the LSO.  It’s all well performed and nicely recorded.  The Girton tracks were recorded at St. George’s, Chesterton and the rest at All Saints, Tooting.  In both cases the recording engineers capture a clear and not too churchy sound.

This is a very varied and intriguing album that I thoroughly enjoyed.  It’s possible to get a feel for it and the house that, in part, inspired it because the LSO recorded some pieces at 575 and posted them to Youtube.  Here’s a link to Inkwells.