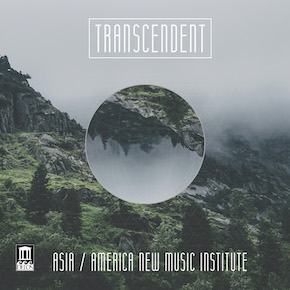 Transcendent is a CD from the Asia/America New Music Institute (AANMI).  It features works by six American and Asian composers performed by Davóne Tines, Matthew Aucoin and members of the AANMI Ensemble in various combinations.

The first set is two settings of Walt Whitman by Matthew Aucoin for baritone and piano (.  The poems are The Sleepers and A clear Midnight.  They alternate a sparsely accompanied lyrical vocal line, beautifully sung by Tines, with much denser passages for the piano, played here by the composer.  It’s interesting music and supports the text well.

Sayo Kasugi’s Lilac Nova is scored for violin and chamber orchestra.  The violin part, played by Ryu Goto, is fast and high, sometimes wild, sometimes playful.  The piece is meant to evoke a journey through the universe with exploding stars etc.  It’s also partly inspired, as the title suggests, by the composer’s synesthesia.  It’s engaging and fun.

Xiaogang Ye’s Lamura Cuo is a 2014 Soundstreams commission inspired by and evoking the sacred lakes of Tibet.  It’s meditative, mixing lots of tuned percussion with strings and woodwind.

Chad Cannon’s Wild Grass on the Riverbank sets texts (translated from Japanese to English) drawn from a book length poem by Hiromi Ito which uses the metaphor of plant species on the riverbank and in the desert to explore themes related to immigration and transplantation.  The six texts are sung by Davóne Tines with chamber orchestra.  They are very different in mood to reflect the texts ranging from a sort of shimmering background through harsh and angry to deeply meditative.  It’s a very interesting piece both in terms of the allusive texts and the way the composer treats them.

My Beloved by Sun-Young Park sets a Korean poem (in translation) written by Kim So Wol following the death of his beloved.  It evokes the traditional Korean custom of “calling out to the dead”.  It’s poignant with a powerful and dramatic vocal line sparsely accompanied by the chamber ensemble.

Narong Prangcharoen’s Whisper from Afar is scored for piano trio and evokes a whisper travelling over great distances.  It starts very simply and builds to a climax pulling in elements of Thai folk melody before, like a whisper, dying away to nothingness.

All the pieces on the disc are quite beautifully performed.  I continue to love Davóne Tines voice and sensitivity to text and the AANMI Ensemble conducted by Yuga Cohler is excellent.  The recordings, made at various LA area locations in 2017, are clear and well balanced and the documentation is extremely comprehensive, including full texts, composer’s notes and bios.  From the last i learn that Mr. Cohler is a summa cum laude graduate of Harvard College, where he studied computer science. His senior thesis, Optimal Envy-Free Cake-Cutting, has been cited by more than fifty articles in the academic literature.  Now he’s conducting cutting edge music.

All in all, there’s a lot of really good music by young composers on this record and it’s all very well performed.  Well worth exploring.