Last night the first concert in Confluence’s virtual season went live.  It features the music of Billy Strayhorn curated by Andrew Downing.  Now jazz is not usually my thing but I found this concert interesting in many ways.  Strayhorn was unusual.  He was a poor African American who aspired to be a classical composer and pianist.  Realising the virtual impossibility of that in post WW2 America he took to jazz and dance band music and formed a very productive relationship with Duke Ellington.  He was also gay and that, rather courageously for the time, comes out in his music.  You can find out much more about Strayhorn in the most erudite chat between Andrew Downing and Professor Walter Vandeleur that precedes the music. 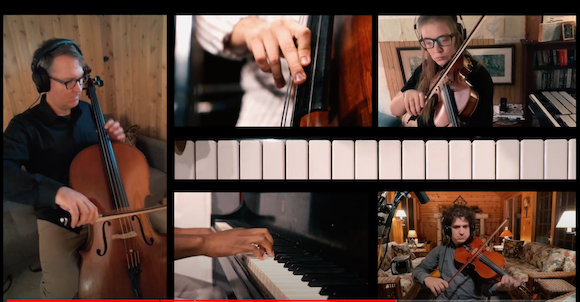 There’s about an hour of Stray horn’s music with each piece introduced by Downing.  It’s mostly vocals with some instrumental pieces and mostly arranged by Downing.  As I said, this is not in any way my area of expertise bu I enjoyed it and what I found fun is that while some of the vocals go to people one might expect to hear singing jazz; Alex Samaras and Patricia ‘Callaghan, other numbers are sung by Confluence stalwarts Larry Beckwith, Marion Newman and Suba Shankaran.  Rather well too.  Instrumentalists featured are Alexa Belgrave (piano), Andrew Downing (cello), Leighton Harrell (bass), Drew Jurecka (viola) and Aline Homzy (violin).

The show was all pre -recorded, mostly at Heliconian Hall, with some segments filmed remotely and mixed in.  The technical quality is uniformly excellent.  The whole hour and twenty minutes or so can be found here.