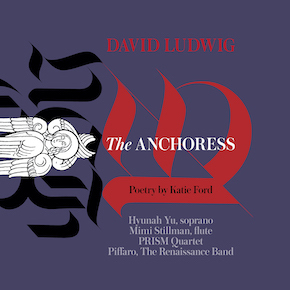 The Anchoress is a 2018 work for soprano and instrumental ensemble by David Ludwig setting texts by Katie Ford.  There are eight “scenes” each exploring an aspect of life of the medieval anchoress; a woman who voluntarily secluded herself in a cell attached to a church.  Such women were seen as almost saintly and thought to have great insight which was sought by all ranks of people.  Issues explored in Ford’s poems include faith, alienation, gender and social power as seen through the anchoress’ eyes.

The ensemble consists of Pifarro, the Renaissance Band (recorders, sackbutts, theorbo etc) augmented by the PRISM quartet on saxophones.  The sound world is interesting as it blends medieval and modern in intriguing ways.  Pifarro is mostly playing recognisably “medieval” music but the saxophones are used for a wide range of effects from lyrical to cacophonous.  The vocal style too is very varied; vocalise, lyrical singing, speech and Sprechstimme all feature, and are handled with great skill and very clear diction by Hyunah Yu.  All in all, it’s a very interesting and enjoyable work.  The disc is rounded out by three short pieces; pretty much sketches for the finished work, played by Mimi Stillman (flute, piccolo) and Matthew Levy (tenor saxophone).

The recording is well done with a very clear sound stage.  There should be a booklet when the disc is released next month but I haven’t seen a copy (I was listening to pre-release material).  Worth a look!