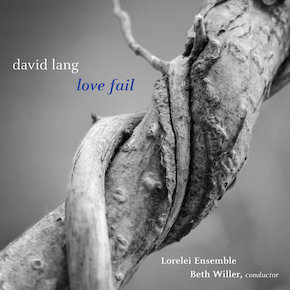 David Lang’s love fail is a choral work inspired by the story of Tristan and Isolde.  It was originally written for Anonymous 4 but later revised for the slightly larger forces of the Lorelei Ensemble (3 sopranos, 3 mezzos, 2 altos) who have now recorded it.  It’s basically an a cappella piece though there are places where the singers play percussion instruments.  The texts are a mixture of elements that the composer has taken (and translated where necessary) from various classic versions of the tale; Gottfried von Strassburg, Marie de France, Sir Thomas Malory and even Richard Wagner among others, and interspersed them with poems on themes of love and loss by Lydia Davis.  The “classical” texts are somewhat repetitive and reflect the classic values of the story.  Davis’ poetry is wordier and less obviously poetic and deals with relationships in more more modern, more personal, less mythic terms.  It’s an interesting contrast that the composer exploits to find two rather different colour palettes within the constraints of eight female voices singing essentially tonal music.  It works.  The risk of tedium is avoided and the work hangs together for its full length.

The Loreleis, under their artistic director/conductor Beth Willer, are really good with a lovely blend and great precision that’s equivalent to, though not quite the same as, a really good Renaissance a cappella group singing polyphony.  There are a few short solos thrown into the mix and these, too, are sung very well indeed.

I couldn’t glean a recording location from the booklet or liner but it’s nicely engineered and the acoustic suits the music well.  The booklet includes full texts and useful notes by the composer.  The disk is available in physical CD format as well as various digital and streaming options.

All in all this is an interesting record of modern tonal choral music that doesn’t descend into schmaltz or musical triviality.  It also contains some really lovely singing.