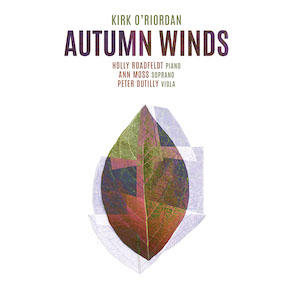 Autumn Winds is a new CD of vocal and chamber music by American composer Kirk O’Riordan.  Much of the music is unashamedly beautiful but it doesn’t sound in the least retro.  It’s a long way from the neo-Broadway style that drives me nuts.

The first piece is Four Beautiful Songs for soprano, piano and viola.  There’s both an ethereal beauty and a driving, rhythmic, sometimes jazzy, quality to the piano part adding energy to the lyrical text setting and equally lyrical viola part.  It suits Ann Moss’ light, bright voice and the playing from pianist Holly Roadfeldt and Peter Dutilly on viola is lovely.

The most substantial piece on the disk is Autumn Winds; a setting of fifteen haiku on that theme by Matsuo Basho.  These are mostly haunting short movements (they typically run about two minutes each).  The piano part is very sparse and economical and the vocal line suits the text. Towards the end, where the poems treat of death and the grave, it becomes much more dramatic.  Again Ann Moss seems well suited to the music and Holly Broadfeldt accompanies with a fine mix of delicacy and drama.

The final piece is for solo piano and it’s called Beautiful Nightmares.  It was written for Holly Roadfeldt and combines minimalism and serialism in a rather evocative way.  Skilful stuff!

The recording is clear and well balanced.  I listened to a digital preview copy so I haven’t seen the physical CD and don’t know what’s included as documentation.  There’s lots of information (notes, bios etc) here though.