Another Brick in the Wall: The Opera, which is currently playing at Meridian Hall, takes Roger Waters’ words from the original album The Wall and sets them to music by Julien Bilodeau which is new but based on the original melodic lines.  The stage production, conceived and directed by Dominic Champagne, is flashy (often literally) and makes extensive use of projections.  There’s a decent cast of Canadian singers (including Nathan Keoughan, France Bellemare, Caroline Bleau, and Jean-Michel Richer), a rather good chorus and a symphony sized orchestra all conducted by Alain Trudel.  It’s loud, expensive looking and in your face.  On paper all the elements of a sort of cross-over opera spectacular are there but they simply don’t come together. 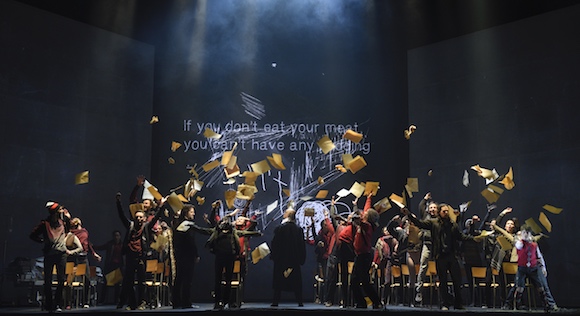 Part of the problem lies in the original.  It’s a period piece that happens to have obtained cult status probably because of one track; Another Brick in the Wall Pt 2 (“We don’t need no education”).  Personally I’d given up prog rock for Shostakovich and Schoenberg by the time The Wall was a thing but I recognise the drug fuelled teen angst lyrics and the music that attempts to be a bit more intellectual than contemporary disco music.  Here they are used in the service of a rather nasty story; the rise and fall of a narcissistic psychopath who abuses women, has fantasies of dictatorship and an obsession with a wall.  This one though is a rock star (Pink) rather than a President.  It doesn’t make him any more sympathetic.  There’s also a curiously Faragiste WW2 nostalgia to the thing, including Dame Vera Lynn (and, boy, does “We’ll meet again” sound odd when sung with Francophone intonation).  All in all, it hasn’t aged well.

As a show, what we get are a series of not very coherently linked scenes in which Pink’s vile and vicious antics are followed by suicidal or catatonic remorse.  Rinse and repeat for two hours.  It peaks with a Fascist snuff porn interlude followed by Pink’s trial in a court of giant black winged birds (why?)  Each scene plays out against a heavily choreographed chorus, rock concert like lighting and projections which are often rather thinly related to what’s going on.  It’s a bit like Cirque du Soleil without the Cirque.  I don’t want to convey the impression that this is revolting or anything.  It (mostly) isn’t.  It’s just earnestly silly and ultimately boring as hell. 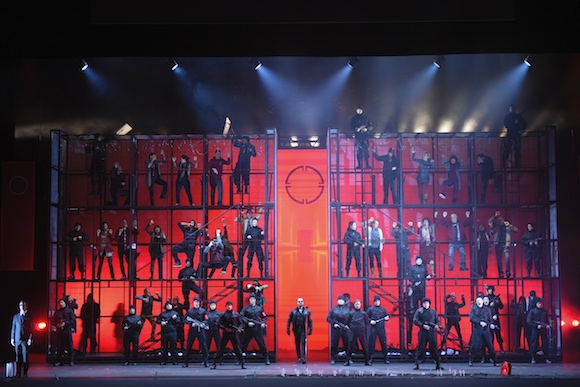 I feel sorry for the singers because they are good.  Keoughan blasts out Pink with sincerity, even when he is spouting rubbish. Bellemare plays the overbearing 1950s-ish mother in a stereotypically recognisable manner and Bleau manages to be genuinely sexy as the abused but perpetually returning girlfriend.  I hope they got paid well.

There’s a line towards the end which refers to “some mad bugger’s wall”.  Indeed!