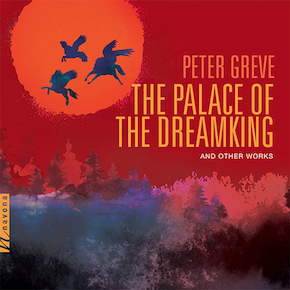 Peter Greve is a Dutch composer of works for various forces all of which could, I suppose, be considered tone poems as they all have thematic/storyline elements.  The “stories” for the pieces on the CD can be found here.  Stylistically Greve is eclectic but very satisfying to listen to.  The Palace of the Dreamking, perhaps unsurprisingly, has a Nordic feel to it particularly in the opening passages.  It’s tonal and almost Sibelius like but then it gets agitated, percussive and more dissonant but for returning to a more elegiac mood.  He has a real gift for melody too.

The Partita for 11 Brass Instruments shows similar versatility.  The opening movement is conventionally melodic but the second movement could have been return in the 17th century.  It puts me in mind of Purcell’s Funeral Music for Queen Mary but then in the third movement it goes full on Shostakovich.

The other pieces on the disk show similar inventiveness and some rather unconventional choices of instruments.  Give Us Peace is a series of seven very short movements for organ and choir.  There’s a trio for piano, cello and clarinet.  Magic Winter – Arctic Saga is back in the Nordic mood with string orchestra before the disk finishes up with a short piece for trumpet and organ.  For those who want to explore in more depth the scores are here.

The performances are by various, mostly Eastern European ensembles and soloists.  Full details are here.

All the music was recorded in 2008 in the Bulgaria Hall in Sofia which seems to have quite a resonant acoustic but the recording is clear enough.