The MIR trio; Mark Skazintetsky (violin), Igor Gefter (cello) and Rachel Kerr (piano) played a programme of music by Jewish composers in the RBA at noon yesterday.  Most of the music was by contemporary composers but the opening set was the Three Nocturnes of Ernest Bloch.  This is superb music and it was beautifully played.  The first movement; Andante, is quite elegiac but things really kick in with the Andante quieto, which contains a quite lovely melody for the cello before the final Tempestoso which fully lives up to its marking. 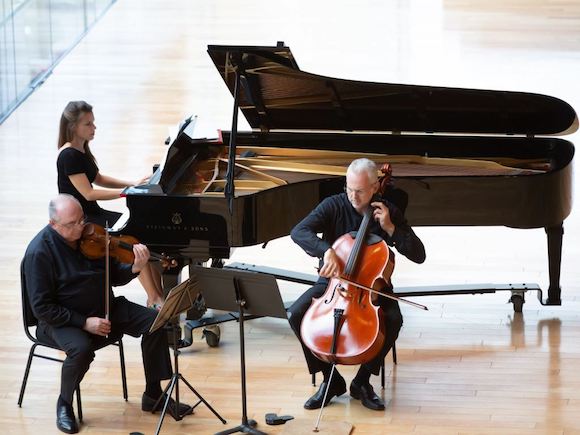 Charles Osborne’s liturgically inspired Elegy came next followed by two movements from Yefim Adler’s Jewish Dances.  Dance by Candlelight has some interesting flickery effects for the cello while Freilechs is Klezmer inspired and has the musicians producing sounds one doesn’t associate with a piano trio.  Interesting stuff.

Ronn Yedidia’s The Song of the Land was also interesting.  I think this was the Toronto premier.  It’s another largely tonal work with some tango references in the piano part. The final set was two movements from Paul Schoenfield’s Café Music.  Apparently this was inspired by playing in a trio in a restaurant in Minneapolis and incorporates ideas from film music, lounge jazz, light classical etc.  It’s eclectic and a bit schlocky but enjoyable on its own terms.

So, an unusual concert mostly of music not often heard delivered with great skill.