The final concert of this year’s Toronto Bach Festival at Saint Barnabas Anglican Church featured two of the little performed Latin masses written for Leipzig (or possibly for Count Franz Anton von Sporck of Lysá.  Sources vary).  In any event they are unusual for liturgical music.  Based on previously written cantatas for the most part, they incorporate elements not much seen in church music.

First up yesterday was the Mass in G major, BWV 236.  It’s a six movement work with the opening Kyrie and Gloria and the concluding Cum Sancto Spiritu given to the choir; here the four soloists doubled by ripienists.  The Gratias is a minuet for bass and strings sung with great finesse by Joel Allison.  The Domine Deus is a duet for soprano and alto sung here by Helène Brunet and Daniel Taylor.  I hadn’t heard Ms. Brunet before but she has a lovely voice perfect for this kind of music.  The two voices blended beautifully too.  The Quoniam features tenor (Lawrence Wiliford) with oboe obbligato; played here by conductor John Abberger.  There was a small orchestra of four violins, viola, cello, bass, two oboes, bassoon and organ.  With eight singers and a small band there’s a clarity and spriteliness hard to achieve with larger forces.  I think it was well judged.  The first half concluded with the Sanctus in D major, BWV 238. 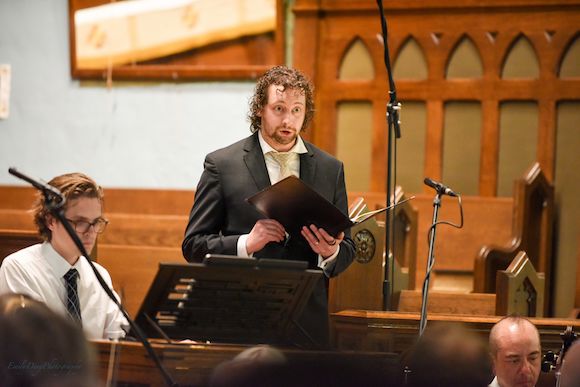 For the Mass in D major, BWV 233 the orchestra was augmented by two valveless horns.  The Kyrie and Gloria here are sung by the choir and the orchestration seems much denser than in the earlier work.  Indeed it’s quite grand even with modest forces.  The Domine Deus is a bass solo with string accompaniment.  Again, good work from Joel Allison.  The Qui tollis is an interesting affaie with a long oboe solo then soprano with cello  accompaniment.  All rather beautiful.  The Quoniam features alto with violin obbligato (Julia Wedman) and the cello as continuo.  Finally it’s back tot he denser textures of full orchestra and chorus for the Cum Sancto Spiritu.

It was a very enjoyable and worthwhile concert of relatively unknown Bach quite excellently presented in an appropriate setting.