Dido and Belinda is the first show from Opera Q and Cor Unum Ensemble.  It’s a reimagining of Purcell’s Dido and Aeneas from Belinda’s perspective and with a decidedly gender fluid twist.  Nathum Tate’s libretto is extended by spoken passages which give Belinda’s take on the story and make it very much  a story of the two sisters.  The back story is Dido’s flight from Tyre rather than Aeneas’ flight from Troy.  The future is about Belinda as Queen of Carthage not Aeneas’ “promised Empire”.  It works pretty well though I have reservations about interpolating text in the final scene.  I think Belinda’s accession as Dido’s successor could have been conveyed without interrupting some of the most sublime music ever composed.  That’s a minor quibble though in a story concept that works. 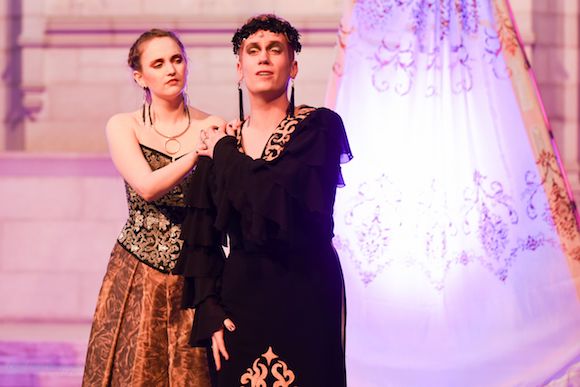 The gender bending is pervasive and effective.  Dido is sung to good effect by counter-tenor Ryan McDonald, Aeneas by mezzo Camille Rogers.  Belinda is taken by a soprano; the striking Rebecca Genge.  There’s even more fun with the witchy trio.  The sorceress is sung by Korin Thomas-Smith in a mixture of his muscular baritone and falsetto.  He looks stunning in a sort of tutu and heels and manages the catwalk walk with aplomb.  Tenor Daevyd Pepper and soprano Rebecca Gray, as a sort of slutty schoolgirl witch, are simply hilarious.  Their physical histrionics are matched by some very funny over the top vocals.  This was actually laugh out loud stuff. 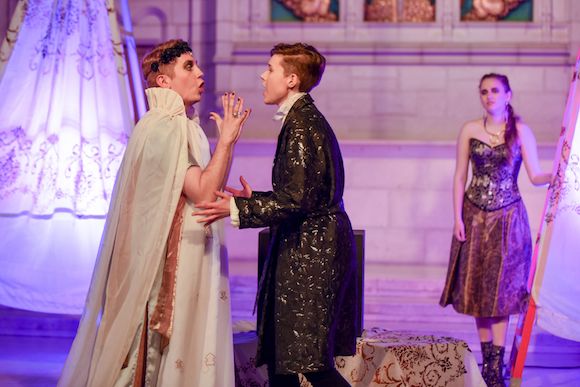 There was an eight person chorus, which also provided Second Woman, Spirit and Sailor.  It seemed just the right size for Trinity College Chapel.  There was also an eight piece band playing in the transept leaving a clear performance space in the chancel and, at times, the nave.

The set was simple; a few cubes and some draped ladders, but effective.  The costumes and, especially make up (Carlyn Routledge) were striking.  Director Madison Angus made excellent use of the somewhat awkward space to create an extremely dynamic experience.  All in all it was hugely enjoyable and much more fun than, say, Opera Atelier’s heavy handed effort.  The balance between the comic and the tragic was well judged.  The reemphasising of the story made sense and was well conveyed.  Everybody seemed to be having fun and it was musically of very high quality.  Given that the budget was roughly nothing and that scarcely anyone involved was more than a year or so out of school I think one has to be impressed.  There’s one more chance to see Dido and Belinda; at 7.30pm tonight.