Last night Thomas Hampson, his son in law Luca Pisaroni and pianist Vlad Intifca appeared at Koerner Hall.  It was a curious program.  The first half was made up of opera arias and excerpts.  There was a sequence of Conte/Figaro and Leporello/Don G numbers.  They were, of course, very well sung.  Both singers are noted exponents of these roles but I really didn’t see the point.  They were pieces I’m sure pretty much every audience member has seen with orchestra, on stage, multiple times.  With piano accompaniment it all seemed a bit pointless.  There followed two longish scenes; the Riccardo/Giorgio confrontation from I Puritani and the scene from Don Carlo where Posa pleads with the king for a change in policy in the Netherlands.  These worked better; perhaps because they are less familiar but more likely the fact that each featured Pisaroni in a genuine bass role.  This allowed for more variation of timbre and colour than the Mozart pieces. 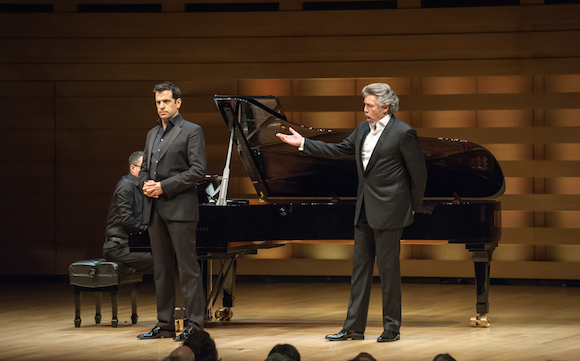 After the interval it was lighter fare.  Hampson, of course, is noted for operetta and classic Broadway rep and he performed here with flair.  Pisaroni’s solo contributions sounded less idiomatic but the duets were good and in Anything You Can Do, Intifca jumped in to prove that he could, indeed, sing higher than either of them.  The Malatesta/Don Pasquale duet made for a generous encore. 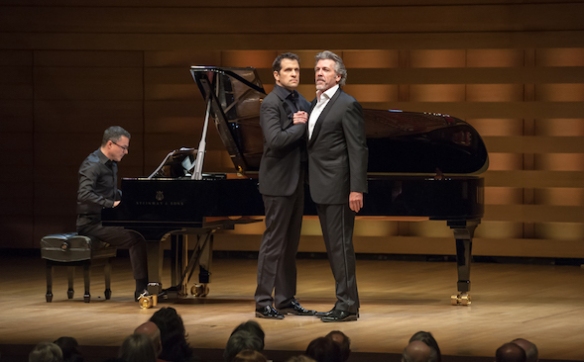 All in all it this concert was what it purported to be.  Lack of enthusiasm on my part is entirely due to the fact that I could come up with an almost endless list of material I would rather hear these fine singers perform.

2 thoughts on “A brace of baritones”