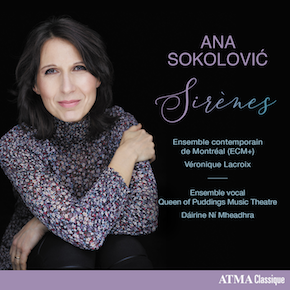 Sirènes is an album of pieces by Montreal composer Ana Sokolović.  The first pice, which gives the album its title, is written for six unaccompanied female voices.  It’s performed here by the vocal ensemble of Queen of Puddings Music Theatre conducted by Dáirine Ní Mheadhra. The six ladies in question are Danika Lorèn, Shannon Mercer, Magali Simard-Galdès, Caitlin Wood, Andrea Ludwig, and Krisztina Szabó.  It’s an interesting piece and very Sokolović.  The text is bent and twisted into sound fragments which are “sung” using an array of extended vocal techniques.  The overall effect is of a shimmering, fluttery and quite absorbing sound world.

The second piece; Tanzer Lieder, sets French, German and English texts by Francisco Tanzer.  It’s scored for soprano (here Florie Valiquette) and piano trio.  It’s anther example of Sokolović’s unusual treatment of text and her interest in “sound as such”.  The overall effect is quite ethereal.  There’s no sense of narrative or story telling.

Pesma takes the idea of words as sound a step further.  The original text was written by the composer in Serbian and forms the first movement.  The subsequent four movements are the same text but translated into Arabic, French, Kifoulirou, and Indonesian. It’s scored for mezzo soprano (here Krisztina Szabó), flute/piccolo, two clarinets, piano, violin, viola, and cello.

The final piece on the disk is Evta; scored for solo violin, flute/piccolo, clarinet/bass clarinet, bassoon, horn, trumpet, percussion, piano/cymbal, two violins, viola, cello, and double bass.  Evta means “seven” in the Serbian Roma language and each of the seven movements is inspired by the colours of the chakras and is associated with one of the notes of the scale: C / red, D / orange, E / yellow, F / green, G / blue, A / indigo and B / violet. One can clearly hear that it’s inspired by gypsy violin music.  The solo violin part is taken here by Andréa Tyniec.  As with Tanzer Lieder and Pesma, the other instrumentalists are drawn from the l’Ensemble contemporain de Montréal (ECM+) conducted by Véronique Lacroix.

I find it impossible to say anything useful about the performances, per se, on a disk like this.  There are no comparators and the works all new to me.  Mostly I’m just a bit amazed that anybody can play/sing it at all!

The recordings were made at various locations in Toronto and Montreal in 2018.  It’s all very well engineered and just fine from a technical point of view.  The booklet has all the texts and really good notes about each piece.

In summary, if you have been intrigued by Sokolović’s music in the past or are just curious about it, this is a pretty good disk to explore.