Last night the main stage of the Four Seasons Centre was the setting for celebrating the award of the twelth Glenn Gould prize to the great Jessye Norman.  There were speeches, of course, celebrating Ms. Norman’s life as a singer rising to the top of the profession from unpromising origins as well as her lifetime of educational and philanthropic endeavours.  They were decently short and to the point allowing us to get onto to the music, though not before we had heard Ms. Norman’s heartfelt and very touching acceptance speech.

The COC orchestra were in the pit throughout with conducting duties shared by Jean-Philippe Tremblay, Bernard Labadie, Donald Runnicles and Johannes Debus.  The first singer was South African soprano Pumeza Matshikiza with Strauss’ Cäcilie followed by a song in her native Xhosa and a lovely rendition of “Song to the Moon” from Rusalka.

Next up was Ryan Speedo Green.  Mahler’s Urlicht sounded appropriately Mahlerian though I’m not sure pit and stage were entirely in sync.  Things improved in that department when Labadie replaced Tremblay for a very nice account of “Aprite un po’quegli occhi” from Le nozze di Figaro.

Runnicles took over the pit.  The empty stage was lit with three ethereal cones of light as he took the orchestra through a haunting account of the Tristan prelude.  As the last notes floated away Nina Stemme walked slowly to the the centre cone and, perfectly still, sang “Mild und Leise”; the opening phrase of an utterly riveting Liebestod.  This was the sort of singing one would crawl over broken glass to hear!

The second half kicked off with the presentation of the Protégé Prize to American jazz singer Cécile McClorin Savant.  She then used her light, bright voice (total contrast with Ms. Norman) to give us some up tempo jazz numbers with Sullivan Fortner at the piano.

Then it was Wallis Giunta’s turn.  Wearing quite the sparkliest dress of the evening she used her smokey mezzo for a beautiful rendition of Dido’s lament before being joined by tenor Roderick Dixon for a dead sexy “Seguidilla” from Carmen.  Based on this I’d say try and get tickets for Carmen at Oper Leipzig this season.  It could be sensational.

Mr. Dixon was not to be outdone (though topped perhaps) and produced a really excellent “Celeste Aida” and a very decent “Siciliana” from Cavalleria rusticana before moving to the piano to accompany himself in a moving account of “Nobody Knows the Trouble I’ve Seen”.

The Nathaniel Dett Chorale, directed by Brainerd Blyden-Taylor, were up next with three complex arrangements of spirituals.  Not an approach to the music I’d heard before but very interesting.

Finally, with Johannes Debus in the pit, we got Sondra Radvanovsky.  I think it would be hard to find a singer who more completely became her character than Sondra did in “Ritorna Vincitor!”  The darkening of the voice at “Un Re, mio padre di catene avvinto!” was spine chilling.  The”Vissi d’arte” that followed was also very fine. 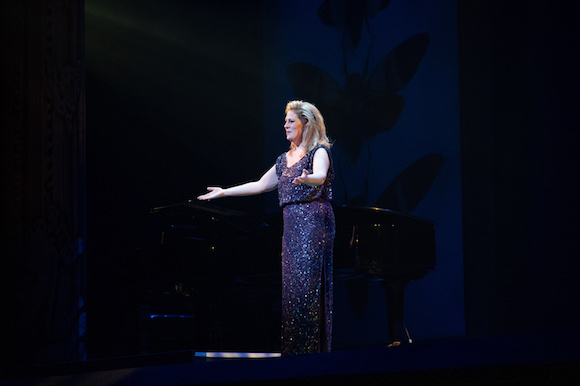 That was the end of the published program but we had a highly emotional bonus to come.  Ms. Norman, in her wheel chair was joined by Cécile McClorin Savant and Sullivan Fortner for a highly affecting “Somewhere” from West Side Story which seemed to sum up the evening’s theme of inclusivity quite perfectly.