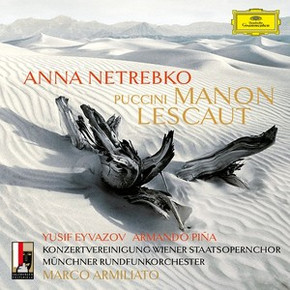 Not too many CDs of new opera recordings, at least of mainstream repertoire, come my way these days.  Studio recordings have become rare and the usual medium is a video recording, itself a spin off from a live broadcast; TV, cinema or web, of a live performance.  This makes sense to me.  Just listening to an opera has always seemed a second best.  Anyway, that’s all by way of saying that I was a bit surprised to find myself listening to a CD edition of a live recording of Puccini’s Manon Lescaut from the 2016 Salzburg Festival.  How did this recording happen you ask?  The answer is on the box, where Anna Netrebko in the title role, gets top billing, even over the composer.

It really is the Netrebko show.  It’s become one of her favourite roles and it really does suit where her voice is now.  She sounds beautiful, can hit all the notes and can spin out very lovely sustained high notes.  Maybe she sounds a bit mature in the opening act.  Nine years ago, in the Massenet version, she could be a convincing 16 year old convent girl.  Not so much now.  Still it’s a very fine performance and the main reason for buying this CD set.

The supporting cast is mostly pretty decent.  I liked Armando Pina’s solid Lescaut a lot and Carlos Chausson made an appropriately mature and authoritative sounding Geronte.  Benjamin Bernheim is a rather fine Edmondo too.  The weak link is Mr. Netrebko, Yusif Eyvazov, as Des Grieux.  This role really needs a top notch Puccini tenor.  Think Domingo in the classic 1983 ROH recording (with bonus Te Kanawa and Allen), or even Giordani in the MetHD version.  Eyvazov sounds pinched and a bit nasal and just isn’t much fun to listen to most of the time.  Marco Armiliato conducts the Münchner Rundfunkorchester and it all sounds suitably red blooded where it’s supposed to.

The recording was made in the Großes Festspielhaus and is clear and well balanced.  The disk package is comprehensive with a synopsis, essay and full libretto translated into English, French and German.