This time last year I attended a workshop performance of a work in progress; Aaron Gervais’ The Harvester.  That time it was in piano score but semi staged.  Last night it was presented, at Gallery 345, in concert format but with chamber orchestra.  I’m not going to recap the plot etc because it’s all in last time’s review.  Let’s start by saying it’s coming along and I really look forward to seeing a fully staged version.

So, back to last night.  The concept is of a double bill of Schoenberg’s Erwartung in a chamber reduction followed by The Harvester so last night we started with half the Schoenberg (up to the discovery of her lover’s body).  The chamber reduction (by Aaron Gervais) for piano, three woodwinds, strings, horn and percussion works remarkably well.  The effect is similar (ironically) to Schoenberg’s chamber versions of Mahler’s songs.  Textures are clearer, if less lush, and the singer is less pushed for sheer volume which allows for a bit more subtlety.  It’s different but it works.  On this scale it’s a good fit for Stacie Dunlop; one of those singers who is an excellent musician and interpreter but is not a huge voice. 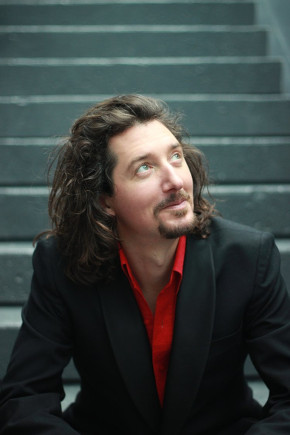 For The Harvester it was really useful to have seen it staged because I could picture the creepy stage action that makes it so effective.  Here, video projections by Catherine Thomson made for an evocative start but once inside the Harvester’s underground home it was all in the imagination.  The ten instrument ensemble seems just the right size to give enough colour without making life hard for the singers or being economically prohibitive.  Also, with the two works presented together one could more easily see the point of the coupling.  It’s not that Gervais’ music sounds all that much like Schoenberg but in the totality of operatic styles they are close enough for it to make sense.

Alexander Dobson again sang the title role.  As ever he was a model of clear diction and entirely convincing.  Stacie sang all three female roles with appropriately contrasting characterization.  Even without surtitles 95% of the text was clearly audible.  The gap, again is the big duet between the daughter and the Harvester.  It’s not a long gap but it is a big one as this is the dramatic and emotional climax of the opera.  I’m hoping that this issue will be fixed in the staged version (it needs to be for Erwartung anyway).  Kevin Mallon conducted a young and most impressive ensemble.

It’s an interesting time for Canadian opera.  Economics decree that the big companies can only do a very limited amount of contemporary work between endless runs of seat filling Verdi and Donizetti though I’m very happy to see them, mare ultra ad mare, presenting at least a few new works.  The gap is being filled by chamber opera in a way that’s reminiscent of Britten and the ETO in England after WW2.  It’s the future, or at least an important part of it.  Productions that can be packed up in the van, two or three singers and a dozen instruments in a package that can be presented in smaller centres as well as the handful of major cities with regular opera.  I think this double bill is going to be a valuable addition to that trend.  It’s a trend the arts councils need to fully embrace.

1 thought on “Workshopping The Harvester again”