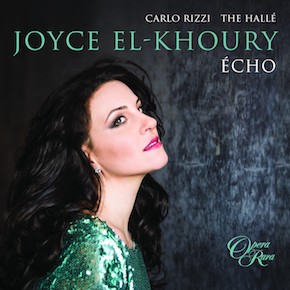 Lebanese Canadian soprano Joyce El Khoury’s new CD on the Opera Rara label is a sort of “tribute album” to 19th century Belgian diva Julie Dorus-Gras. Mme. Dorus-Gras was a fixture at L’Opéra de Paris in the middle decades of the century, though only after she had starred in the performance of Auber’s La muette de Portici which sparked off the Belgian revolution of 1830. In Paris she created many new roles including Alice in Meyerbeer’s Robert le diable and Princess Eudoxie in Halévy’s La Juive. She thrived on the mixture of bel canto and grand opera that flourished in Paris in this period.

It’s easy to see why Joyce El-Khoury would be drawn to this repertoire. It fits her very beautiful and agile voice perfectly. She has all the bases covered and they are all shown to advantage on this recording. Her virtuosity in bel canto ranges from the accurate descending runs and coloratura of Lucia’s entrance aria in Lucia di Lammermoor to the much more dramatic Act 1 duet from the same work where she blends beautifully with tenor Michael Spyres. In the French repertoire she ranges from a beautiful “Sombre forêt”, from Rossini’s Guillaume Tell, showing exquisite legato, to the much bouncier “Quand je quittai la Normandie” from Robert le diable. There’s even some rather unexpected Der Freischütz albeit in Berlioz’ French version. Altogether there are ten quite long scenes and arias adding up to around eighty minutes of music. Accompaniment throughout is by the Hallé conducted by Carlo Rizzi and they sound entirely sympathetic with some fine solo playing from the concertmaster in the intro to “Jours de mon enfance” from Hérold’s Le Pré aux clercs.

The recording, made in the Stoller Hall at Chetham’s School of Music, is crisp and detailed with voice and orchestra nicely balanced. The accompanying booklet is quite lavish with lots of biographical information plus contextual, musicological and historic notes, as well as full text and translation, for each track.