I caught the second performance of the current run of Carmen at the COC this afternoon.  It’s a revival of the production previously seen in 2010 but with, we are told, debuting director Joel Ivany being given some freedom to change things up a bit.  Obviously he was mostly constrained to use the existing sets and costumes which, for reasons that escape me, transplants the piece to 1940s Cuba which was, as far as I know, markedly short of both gypsies and bull fights but there you go.  Actually it matters scarcely at all because both sets and costumes are generic scruffy Hispanic and could be anywhere from Leon to Lima.  For the first two acts too the blocking and Personenregie is pretty standard too.  It’s all really down to the chemistry between the singers and the quality of the acting and neither is anything to write home about.  It says a lot when Frasquita is scene stealing.  Fortunately it livens up a lot after the interval.  The third act is atmospheric and Micaëla’s aria is deeply touching and for the first time I felt genuine emotion.  It gets even better after that with a really effective use of the whole auditorium for the parade which had much of the audience clapping along and a clever stage set up for the crowd during the final confrontation scene.  I don’t think it’s a production for the ages but it’s better than merely serviceable and I’ve seen much worse Carmens.  And, frankly, it’s simply not realistic to expect one of the season’s cash cows to push the envelope very far.

So if that sounds a touch less than wholly enthusiastic let’s talk about the singing because it’s worth the price of a ticket.  The men have the best of it.  Russell Thomas, the Don José, has a genuine heroic/romantic tenor voice with power and control and ringing high notes.  Good stuff.  Christian Van Horn looks as if he was born to play Escamillo.  He’s about eight feet tall (Sasha Djihanian in impressive heels didn’t even come close to his shoulder) and has a real swagger and a powerful, commanding baritone.  Maybe it’s a bit grainy but that’s hardly a drawback with this character.  Anita Rachvelishvili has a lovely dark, sultry mezzo and is a good mover.  If the chemistry between her and Russell Thomas had just sparked a bit more this could have been really special.  And then there was Simone Osborne as Micaëla.  She sang sweetly and acted well and, as mentioned earlier, was really affecting in her big aria though she did tend to get covered a bit in the duets.  And, again, if only there had been more chemistry with Don José.  There’s a second set of singers for all these roles who have their first show on Wednesday.  It will be interesting to see how that goes.

The minor parts were carried off to great effect.  The experienced pros; Alain Coulombe (Zuniga) and Peter Barrett (Morales) were very classy and the four younger singers (all current or recent Ensemble Studio members were excellent.  Iain MacNeil (Le Dancaire) and Jean-Philippe Fortier-Lazure (Le Remendado) were excellent and often very funny and  Charlotte Burrage (Mercedes) and, especially, Sasha Djihanian (Frasquita) rather upstaged our Carmen in the sexiness department.  If everybody in the production had shown the dramatic intensity of Sasha it would have generated quite a bit more buzz. 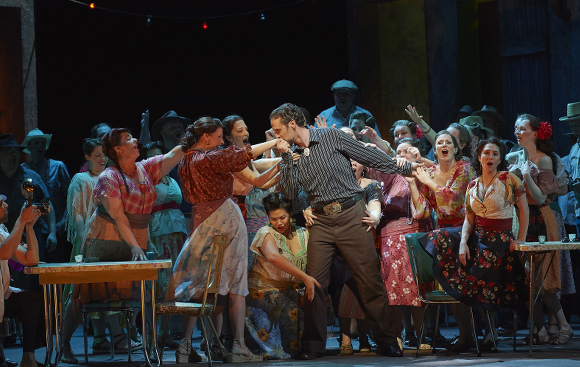 I really liked Paolo Carignani’s conducting.  It was full bloodied and detailed and not at all self indulgent.  He was greatly helped by really good work by the orchestra and chorus and children’s chorus who were quite excellent.  So, all in all, a decent enough pot boiler that would be greatly improved by better chemistry between the principals.  Oddly enough that often seems to happen with second casts at the COC so I shall look forward to Wednesday with interest.

Bizet’s Carmen continues at the Four Seasons centre until May 15th. 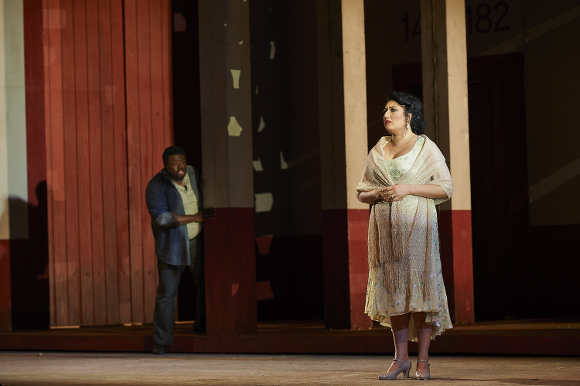 1 thought on “Carmen in Cuba?”