There’s a lot to like in the COC’s production of Verdi’s La Traviata that opened at The Four Seasons Centre last night.  Arin Arbus’ production; a co-production with Chicago Lyric Opera and Houston Grand Opera avoids the cloying sentimentality of many productions of this piece and, without being in any way gratuitous, deals very directly with the world Verdi wanted us to see; a world of hypocrisy, sex for sale and early, pointless death. 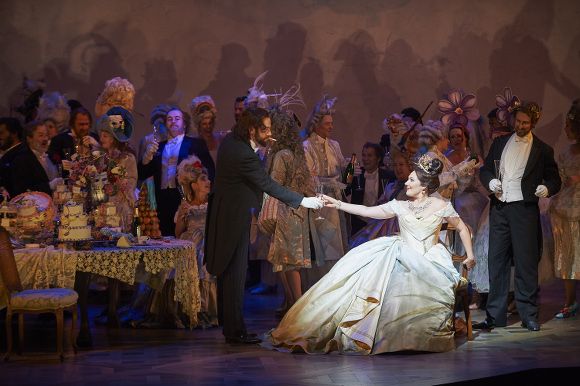 The production is set straightforwardly in the demimonde of the 1850s.  The story telling is straightforward enough too but there are some deft touches.  Violetta and Alfredo’s country retreat suggests crushing boredom rather than rural idyll.  The Act 2 gypsies and matadors are quite weird and sinister with zombie and skeletal elements.  Perhaps the “good life” has an underside?  Act 3 is perhaps the best staged act of all.  It’s very spare and bleak.  Carnival is merely hinted at.  The chorus is off stage and all we see are some shadowy projections on the walls of Violetta’s bedroom.  It works well. 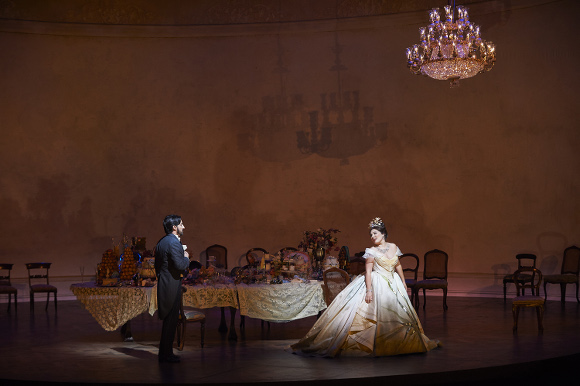 This production too is pretty explicit about Germont père’s motivation and values.  This really is bourgeois patriarchy and hypocrisy at its finest (If he’s so respectable and concerned for conventional morality how does he even know about Flora’s party, let alone get an invite?).  So full marks to Arbus for not turning this into something from a Catholic version of a Disney princess movie but, and it’s a big but, there’s nothing here to suggest why Violetta agrees to Germont’ demands.  Admittedly there’s nothing in the libretto either.  It’s a honking great plot hole (not the only one in 19th century opera) and most productions do what Arbus does, which is skip right over it.  The very best Traviata‘s (Decker and Béziat for instance) do attempt an answer here.  Not, I think, a mortal sin to duck this but it is a bit like ignoring the “for extra credit” question on an exam paper.

The performances are very good indeed.  The pick for me was Quinn Kelsey’s Girgio Germont.  His singing was stylish and powerful enough and his stage presence compelling.  This really is what a Verdi baritone is supposed to be like!  Ekaterina Suirina’s Violetta was both well sung and acted.  She manages the changing moods and vocal demands of each act extremely well and she doesn’t do the “Oh look at me.  I’m a diva” act that undermines so many other good Traviatas.  She’s sweet toned, accurate and always in character.  Charles Castronovo, as Alfredo, took a little while to warm up (opening night nerves?) but by Act 2 was sounding really very good indeed.  The supporting cast, mostly Ensemble Studio past and present members, were excellent and the chorus was in fine form.  Marco Guidarini conducted.  It was a pretty lively reading though from my seat the orchestral sound was curiously muffled at times.  I have a feeling that was a function of being in one of the acoustically less than perfect patches (rare in that house) rather than anything Guidarini did. 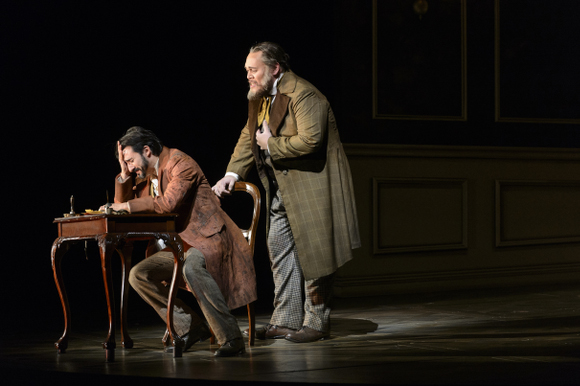 So, it’s a very good production with lots of neat touches and nothing to bother the traditionalists but it doesn’t quite illuminate the murky underlying depths of this very multi-layered piece.  The performances are absolutely top drawer.  The COC has assembled a really good cast and they turn it on.  All in all a very fine effort.

La Traviata continues at The Four Seasons Centre.  There are nine more performances between now and November 6th; six featuring last night’s cast and a further three with Joyce El-Khoury, Andrew Haji and James Westman in the leading roles.