Later this month there is an Ingrid Bergman retrospective at TIFF Cinematheque to celebrate the 100th anniversary of her birth.  There is one (vaguely) opera related film in the offering; Gaslight, a 1944 thriller directed by George Cukor about the niece of a murdered opera singer, Alice Alquist.  The girl aspires to an operatic career too and we do see Bergman practicing an aria from Lucia di Lammermoor.  However the main plot turns on the Bergman character (Paula) marrying and returning to her aunt’s house in London where she is subjected to attempts by her husband to drive her mad to get possession of the house where he hopes to find the jewels he murdered Paula’s aunt for in the first place.  The denouement is precipitated by a young Scotland Yard operative who, as a small boy, was given a glove worn by Alice as Juliette and signed by Gounod. 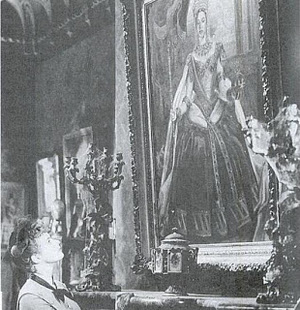 And here we get to an operatic puzzle I haven’t been able to work out.  The jewels are “hidden” on Alice’s costume for her “most famous role”; the empress Theodora.  The murder takes place in 1875 so it can’t be Massenet’s opera. We are told that she sang it at Covent Garden and in St. Petersburg.  Anybody care to guess what opera we are dealing with here or has it just been made up?  The Gounod is plausible as it premiered in 1867 and was certainly in the Covent Garden repertoire by 1876.

Puzzles aside it’s a very good watch if you like film noir.  Bergman won her first “Best Actress” Oscar for it and Charles Boyer is superb as the creepy husband.  It even has Angela Lansbury in her screen debut as a bonus.  If the technical quality of the screener is anything to go by TIFF have a really good print and it should look really good on the big screen.