Tcherniakov takes the characters and story of Mozart/DaPonte and recasts them quite radically.  Zerlina is Donna Anna’s daughter.  Donna Elvira, Donna Anna’s cousin, is married to Don Giovanni.  Leporello is a family member too.  The sense is of one extended, conventional, bourgeois family in which Don Giovanni is a fatally disruptive intrusion.  Tcherniakov changes the time line too.  Instead of taking place over a 24 hour period the story plays out over many weeks.

Central to the piece is Tcherniakov’s idea of Don Giovanni.  He’s no brash, young seducer but rather an older, rather lonely, man that women take pity on.  Leporello is more a kind of chorus than sidekick.  Donna Anna is highly sexed and clearly has the hots for every man in the piece; Masetto included.  Donna Elvira is deeply sad.  These characters are placed in a conventional continental European bourgeois setting to play out the logical consequences of their characters and relationships.

We open, before the overture starts, with a tableau of the family gathering for dinner.  The Commendatore is clearly very much in charge.  After the overture the opening scene is unambiguous.  Donna Anna is all over Don Giovanni, to the disgust of her father.  There’s a brief scuffle between the Commendatore and Don Giovanni.  The older man bangs his head on something and dies.  It’s clearly an accident.  This Don Giovanni is not a violent man. Accident or no, the death of the Patriarch destabilises the family unit and sets in train what follows. 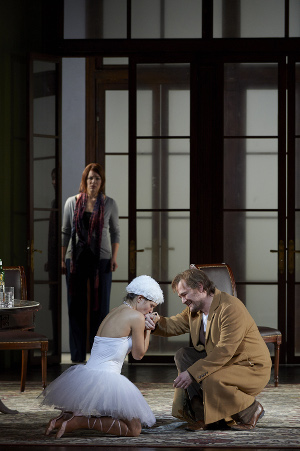 In the following scenes we see Donna Elvira and Zerlina both fall for Don Giovanni.  During Lá ci darem la mano Zerlina is very much taking the initiative, repeatedly kissing the Don’s hands, while a very sad looking Donna Elvira watches through the window.  The following scene where Donna Anna demands vengeance from Don Ottavio has her practically raping him.  Batti, batti sees a frustrated Zerlina trying desperately to get any sort of reaction out of Masetto.  There’s real tenderness between Don Giovanni and Donna Elvira and, at the end of the act, it’s clear that Zerlina’s beef isn’t that Don Giovanni has raped her but rather that he isn’t paying her enough attention.  And perhaps here we have the key to this family and just why Don Giovanni is such a disruptive element.  The women in this world have the hardest time even getting noticed by the men except for poor, sad Don Giovanni, who will distribute his largesse freely, but who thereby arouses jealousy in the women who compete for his attention and the men who care about their ownership of their women rather than the women per se.

It was Act 2 last night that really caught my attention anew.  What we are witnessing is the moral and physical deterioration of Don Giovanni.  He’s clearly affected both by guilt over the death of the Commendatore and a sense of his own declining physical powers.  He appears to have a seizure of some sort but he’s not going to let that cramp his style and he’s now drinking more heavily than ever.  Any doctor will recognise this scenario.  It’s also as we move into Act 2 that curiously da Ponte’s words seem to fit Tcherniakov’s action even better than they fit the traditional take.  The scene where Leporello and Don Giovanni swap clothes to deceive Donna Elvira is a case in point.  Does anybody read the original as other than very silly farce?  Here it takes on layers of meaning.  There’s no deception.  Elvira knows and accepts that it’s Leporello making up to her.  It’s a man.  Making up to her.  Providing “love” or the semblance of it, that she’s desperate for from Don Giovanni.  Leporello is clearly enjoying being allowed to play the alpha male for once.  It’s very sad and very touching. 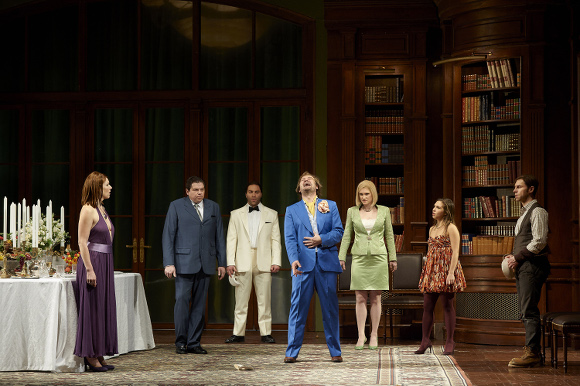 Similarly, in the scene where Donna Anna has a kind oif breakdown and Don Ottavio asks Zerlina to look after her for him we might ask why, in a house full of servants, he asks some random peasant girl to care for his fiancée.  As her daughter, Zerlina’s role makes sense.  The graveyard and closing scenes too are deftly handled.  The supernatural elements of the production are obviously a problem for any modern director and seem, nowadays, usually to be handled by making them some sort of figment of Don Giovanni’s (often chemically stimulated) imagination.  Here they are part of the vengeance plot.  Leporello plays an elaborate, and rather funny, game with Don Giovanni in the graveyard scene and in the final scene the “Commendatore” is a paid impersonator.  It’s more than enough in Don Giovanni’s advanced state of disintegration.  The Commendatore, or his impersonator, also appear a couple of times briefly earlier making one wonder how deep Don Ottavio’s plot is.

At the very end Don Giovanni is stripped of any last vestige of his self image.  Is he dead?  Is he dying?  Is he merely broken?  It’s hard to tell but the Family, destabilised by the loss of its Patriarch, has been restored by expelling the outside disturber.  The other characters leave the stage to get on with their lives.  I’ve seen this production twice now and I’m scheduled to see it again on Friday.  I’m convinced that it’s a work of genius and I’ve yet to unravel all the layers and threads.  I look forward to my next tussle with it.  This is deep and compelling theatre.

A production like this could never be successfully realised without a really capable cast fully committed to the concept.  I knew from various sources that there was that real and deep commitment across this cast and it was really communicated last night.  There is some brilliant acting.  Russell Braun is the best I have seen him in years.  The donnas make a wonderfully contrasting pair.  Jane Archibald’s impeccably tailored nympho Donna Anna makes a marvellous contrast with Jennifer Holoway’s deeply affecting, sad, can’t get anything quite right Elvira.  Kyle Ketelsen is the perfect fiol for the Don as a sort of cheeky chappy.  When I saw the DVD I thought Don Ottavio was deliberately being played as a bore but last night Michael Schade, as he does, added another layer of meaning.  In a way it was as strong a reading as his Tito for Chris Alden.  Sasha Djihanian, in her first major role on a major stage, was a brilliant Zerlina.  She’s tiny, which helps fit her as the “kid” among the ladies, but a powerhouse.  Her attachment to Don Giovanni’s overcoat was heartbreaking.  Zachary Nelson was a serviceable Masetto but, to be fair, this seems to be the one character Tcherniakov didn’t really have strong ideas about.  Much the same, I suppose, could be said for Andrea Silvestrelli’s dignified Commendatore.

There was singing too.  Very fine singing.  All the big numbers came off very well.  Highlights for me included Russell’s Deh vieni and a ravishing Sua della pace from Michael.  The ladies were also in fine voice with stylish singing both.  Jane Archibald, on role debut, displayed her well known coloratura chops to good effect and Jennifer sang a truly heartfelt Mi tradi.  It was a joy to hear Sasha’s voice bloom in a large hall.  She’s never lacked for power and in the wonderful Four Seasons acoustic she sounded fabulous.  I’ll try and get more analytical about the singing on Friday.  Michael Hofstetter’s conducting was very fine.  There’s a danger with a production like this that the conductor will try and impose a different vision on the piece but Hofstetter was clearly “on the team”.  He provided very sympathetic support for the singers, allowing them time to act and providing appropriately restrained support for some fine piano singing.  This was conducting in the service of art not ego.  And, of course, the COC orchestra and chorus did what we all expect of them.

I guess one of the things that many of us were on tenterhooks about was how the audience was going to react.  No secret that there is a conservative element in the Toronto audience that will always reject anything other than the most literal presentation but what of the middle ground (if it indeed exists)?  Something rather interesting happened.  After a storm of applause for singers and conductor Tcherniakov and his team came on stage.  The inevitable booing started in certain quarters but it was met by a counter barrage of bravos, cheering and whooping which, from where I was in the Orchestra Ring, seemed to rapidly drown out the boos.  Reports from other parts of the house were mixed.  Whoever “won” I can say it’s the first time at a production of this sort I’ve heard a serious effort to counter the booing and that feels very heartening.  Overall, listening to conversations, in the public spaces and after the show, I think that a lot of that elusive middle ground found the production enjoyable and thought provoking but there’s still a non-trivial audience that will reject the unfamiliar.

Bottom line, it’s not often I come out of the theatre or opera house feeling as stimulated as I did last night.  That’s what art is about isn’t it?

Don Giovanni is running at the Four Seasons Centre with nine more performances between now and February 21st.  Details here.  See it if you can.