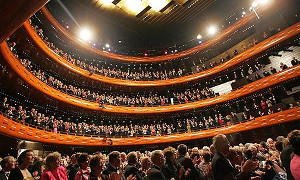 So here we are at the beginning of 2015 and it’s time to look back at the statistics for 2014.  There were 93208 page views, up 32.6% on 2013.  I think that’s not totally reflective of the underlying reality as a non-trivial chunk of the increase was caused by a short period in which The State of the Met got hit 9543 times.  Still, each of the twelve months was busier than the equivalent in 2013, though often not by much.  Analysis of various order derivatives of the underlying functionmight be an interesting exercise in non-parametric statistics but one I can’t really be bothered to do!

Besides the Met piece; also the most commented on post of the year, other popular items were the perennial favourites Cheap tickets at the COC and Ewing’s Salome twenty years on.  Cheap tickets I get but the enduring appeal of a couple of seconds of soprano nudity is a bit puzzling.

What’s changed?  I’m covering some things I wasn’t before; most notably choral and vocal concerts at the TSO (thanks Francine!).  I’m reviewing fewer back catalogue DVDs, owing to having pretty much exhausted the Toronto Public Library collection, and more new ones as I start to get more review copies from record labels.  That also explains a slight increase in CD reviews.  Other than that 2015 looks like it will not be radically different to 2014 bar, hopefully, a couple of weeks in Berlin.