This is the first time I’ve posted about the current labour negotiations at the metropolitan Opera though I’ve been following the story closely.  I have rather a lot of experience of contract and grievance negotiations and I think I can spot bad faith bargaining at some distance.  Good faith bargaining typically occurs when both sides want to reach a settlement.  The opposite when one side is more interested in ramming home some “point of principle”.  This last was often a starting point on the union side in the bad old days ,especially in the UK and Australia but has become much less common.  Nowadays bad faith is much more likely to come from the employer’s side, usually when they are bent on some principle like the “right” to hire and fire at will. 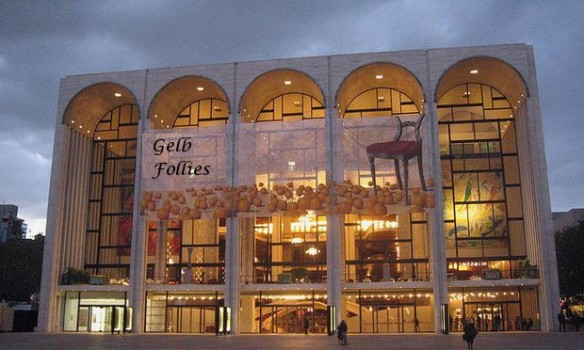 In the case of the Met I submit that management is acting in bad faith in a tangible and obvious way (and note that this is a breach of US federal law).  The first obvious signs are that Gelb and his board have chosen to make their position through ads in the press and rather inflammatory public statements.  They have also hired a lawyer (at a reported $1000/hr for those of you who think the Met choristers are overpaid) notorious for his track records of forcing lockouts in support of union busting.  Management has refused to provide the union with detailed financial statements (in cases where an enterprise is pleading poverty as grounds for concessions, this is plain common sense.  It’s also requred by law in the US.)  Finally, and most damningly in my view, management has completely failed to provide a rationale for why it needs a $34 million/year reduction in labour costs to deal with a deficit of less than $3 million.

Even if one needs reductions in labour costs, reductions in rates and benefits should be the last thing management goes after because it’s the last thing a union can accept without loss of face.  Most unions are prepared, if not exactly happy, to talk about reductions in overtime for example.  It’s hard to quantify this at the Met because of the aforementioned non-disclosure of information but large amount of overtime have been mentioned pretty frequently as one of the reasons earnings are so high.  90% of overtime is caused by management and, again anecdotally, at the Met by bad management.  Let me provide a simple for instance.  In 2012 I attended performances of Nixon in China at COC and the Met on two consecutive days (well the met one was in the cinema).  COC ran with a single 20 minute interval between acts one and two.  The met had two intervals and they lasted about 35 mins.  That’s 50 minutes, on a Saturday where two performances are scheduled.  I wonder how much that cost?  There are lots of similar things one can do.  When the COC did Tristan they sent the chorus home after Act 2 as they don’t appear in the last act.  These things add up.  I bet I could save $10 million without trying too hard!

Then there’s the fact that non labour costs at the Met have been rising much faster than labour costs.  This appears to be as a result of Gelb pursuing a new audience through new productions.  I’m all for new and innovative productions but I don’t think that needs to be expensive.  I’ve seen innovative productions from small companies that cost less than the overtime costs for a week for Gelb’s chauffeur.  In fact, simplification has other benefits; smaller stage crew, faster set changes and so on.

Finally, I find it deeply suspicious that Gelb is threatening a lockout when talks have barely begun and the union is tabling concessions.  Today the unions offered up a plan they claim will save $20 million/year (reproduced at the end of this piece).  I’d like to see the details but I’m far more impressed by their approach than by management’s bombast.

Here’s the latest press release from Local 802.  The presentation of proposed savings (the link) is particularly interesting.

Musicians Propose $20 Million in Cost-Savings for the Met Opera

New York, NY–Friday, July 25, 2014–Local 802, American Federation of Musicians, and the Metropolitan Opera Orchestra musicians today have commenced negotiations with Met Opera management including General Manager Peter Gelb. The union and the musicians released the attached report detailing the failed management and flawed artistic vision of Gelb during his 8-year tenure at the helm of the Met. The report analyzes the dismal reception of Gelb’s expensive new productions by opera critics and patrons and also recommends specific strategies the Met could employ to save $20 Million annually by curtailing Gelb’s lavish spending and realizing scheduling efficiencies.

Gelb has stated in the press that the Met is facing financial ruin and possible bankruptcy, while refusing to provide the musicians, the media or the public any evidence of such a crisis. He has announced that he must impose draconian cuts of over $30 Million, yet has refused to substantiate/document the reasons. No one yet knows why Gelb is asking for over $30 Million in cuts when his reported deficit is only $2.8 Million in the context of a $327 million annual budget.

What is known, however, is that under Gelb the Met’s labor costs have remained flat, while the Met Opera budget has increased by nearly 50% ($105 Million). This is in large part due to Gelb’s overspending on critically panned, unpopular productions, as well as poor scheduling, inferior marketing and extensive management waste. The musicians are in favor or new and artistically daring productions but want to see them managed expertly, whereby the Met is able to achieve artistic success while living within their budget.

Link to MET Orchestra/Local 802 findings on Peter Gelb’s record of managerial and artistic failure; Musicians’ recommendations on cost-saving efficiencies for the
Met Opera.

Even if—after an objective analysis—the Met can be said to be facing some degree of financial challenge, it is clear what the solution isn’t. It isn’t slashing the compensation of the world-class performers and other craftspeople on whom the Met’s excellence and success relies. If Gelb’s cuts were implemented it would be impossible for the Met to recruit and retain the best musicians in the world who today comprise the company. The quality of the Opera would rapidly deteriorate, and Gelb will have succeeded in further decimating the audience that already has been diminished by his failed productions.

The musicians had hoped to purse good-faith negotiations with opera management. Unfortunately, Gelb has pursued a cynical strategy calculated to result in a lockout of his artists and craftspeople and imperil the upcoming Met Opera season. For months, Gelb has purposely refused to provide essential financial information that would have allowed substantive, good-faith negotiations to proceed, instead making erroneous claims in the press in the run-up to his long-planned lockout. His callousness, combined with his attempt to cover up his failed management and lack of artistic vision that has resulted in declining audiences and plummeting ticket sales, jeopardizes the livelihoods of his employees and the many businesses in New York City’s cultural sector and the Lincoln Center area that depend on the Metropolitan Opera for their incomes.

The loss to the City’s economy as a result of a lockout will be in the hundreds of millions of dollars – first, the $327 million that the Met spends on salaries, sets, costumes and on many other vendors/services will be lost; on top of that, the losses to restaurants and hotels, especially those in the immediate vicinity of Lincoln Center, will be devastating given that the Met has 3,800 seats and its audience represents a high proportion of local restaurant and hotel patronage during the opera season.

The musicians believe the Met’s problems are solvable without a lockout and a cancelled season, which will be a major blow to New York City culture and disastrous for Opera’s financial health. They wish the Met to remain an engine of the cultural and tourism economy—and continue to thrill both the Met Opera’s loyal audience and the young people and non-traditional audiences who will carry this great art form into its next generation.

30 thoughts on “The state of the Met”