A bit of a change of pace last night.  I went to see Rebecca Caine and Robert Kortgaard perform in the Shaftesbury Salon series.  Rebecca is one of the original crossover artists; flipping back and forth between opera and musical theatre with a bit of cabaret thrown in.  Last night’s show was definitely firmly in musical theatre territory.  There wasn’t a programme so I don’t have a full listing of numbers.  The first half of the evening was a selection, in essentially chronological order, of works from British musical comedy and reviews of the first half of the last century; each associated with a particular star of the period.  This is music that has pretty much disappeared off the face of the planet.  It’s “light” but rooted in classical singing style/technique unlike the more jazz/pop influenced show music that came after.  It’s also not much like American music of the period; a difference made obvious when Ms. Caine threw in a Kurt Weill number.  Some of it, though by no means all, is fairly undemanding vocally, being written for performers who were perhaps more noted for assets other than their singing technique.  Ms. Caine though has both.  We got these musically rather variable numbers very well sung interspersed with a compact and witty commentary from the very vivacious Ms. Caine.

The second half of the show brought us into the Sondheim and Lloyd-Webber era with, unsurprisingly, an emphasis on Phantom and Les Miserables which have played such a major role in Ms. Caine’s career.  I think I’ve seen Ms. Caine’s Christine before as I was dragged kicking and screaming to the original Toronto run of Phantom by my ex but time and pain have blotted out the memory.  This wasn’t so painful.  We again got a mix of song and anecdotes with the key difference here that most of the linking material was first hand; much of it, in a favourite word of the star’s, “saucy” and all of it very funny.  It was worth the $30 for the catalogue of foibles and complexes of assorted big name directors and leading men.  There was some singing too.  Sondheim I could easily get used to and even Lloyd-Webber sounds more tolerable when sung as well as this.  I’m going to omit the customary Puccini joke but Ms. Caine didn’t. 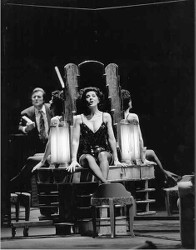 There was also a bittersweet quality to the performance.  Rebecca can go from bouncy stage personality (she’s a pretty fine physical actress) to disillusioned diva and back again in a heartbeat. There were people there last night who had seen her sing the title role’s in Berg’s Lulu and Derek Holman’s Jezebel and I would certainly like to see her in more operatic repertoire.  I see a recent Owen Wingrave in her bio.  How did I miss that?  Was there, maybe, an undercurrent of what might have been.  We all, I suppose, have our might have beens.