Yesterday’s Met Live in HD broadcast of Parsifal was one of the best I’ve seen.  The production is highly effective, the starry cast lived up to the hype and the video direction was sensitive and true to the staging.  Any reservations I have about the experience are due to the work itself but that may be matter for another day.  It certainly reinforced my belief, consolidated by seeing Tristan und Isolde twice recently that these big Wagner operas are high risk, high reward.  When they come off they are incredible.  When they don’t it’s six hours of one’s life gone missing.

François Girard’s staging is extremely powerful.  The first and third acts are set in a sort of post apocalyptic wasteland through which runs a stream; sometimes dry, sometimes live.  It serves as a barrier between the sacred, male land of Monsalvat and a liminal, female zone inhabited by Kundry and the female chorus.  In Act 1 nobody crosses this line.  The gendering, in a highly and dubiously moralised way, of the space is complete.  On the male side Gurnemanz instructs the knights; barefoot in white shirts and black trousers, in the history of their order and Amfortas plays out his agony.  A frenetic Kundry arrives on the female side of the stream.  Her interactions with Amfortas take place with it as a barrier between them.  At the close of the act the stream glows red as the rejected Parsifal dips his hand in it.

In Act 2 we see why.  The stream has opened into a deep chasm rthrough which flows a stream of blood.  This is Klingsor’s realm and it’s here, in blood, that the temptation, rejection and redemption of Act 2 is played out.  There’s nothing flowery about the flower maidens who rather resemble sirens or some similar terrifying but alluring depiction of feminity.  There’s a lot of blood. 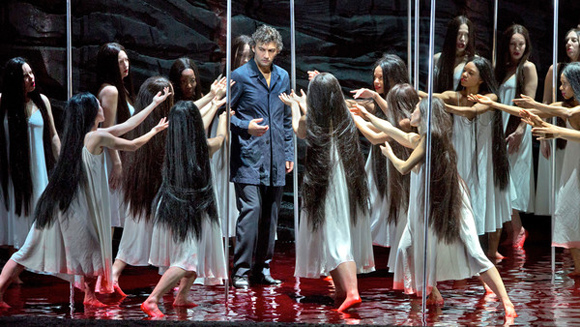 In Act 3 we are back in the wasteland but now, as Parsifal heals Amfortas and the brotherhood of knights the gendering breaks down.  People of both sexes move freely across the stage but there’s still a sense of the danger of the feminine.  There’s some very effective business with the spear and the Grail.

There’s also a lt going on with projections in all three acts but we only got a glimpse of it on the HD.  I’m told that they are beautiful and significant by a couple of people who’ve seen this n the house but, perhaps inevitably, they weren’t very noticeable on the broadcast.

The performances were quite fantastic.  René Pape won the top prize for me.  He had beauty of tone, a beautifully shaped line, power and a real sense of sincerity.  It was ver moving.  Peter Mattei managed an extraordinary impression of extreme physical pain while singing with power and complete lack of distortion.  Katerina Dalayman’s Kundry was by turns, frightened, terrifying, baffled and intensely moving.  It says something that a very fine performance by Jonas Kaufmann was almost overshadowed by the other three.  He really came into his own in the last acy with a complete display of heroic tenor singing and very intense physical acting. Evgeny Nikitin made the most of his blood stained cameo as Klingsor reminding us of what a fine Dutchman he was in Toronto and might have been in Bayreuth.  Daniele Gatti, conducting without a score, gave us a monumentally structured and very slow reading.  It worked.  The power of the piece was well conveyed and it rarely dragged.

Barbara Willis Sweete directed for video and did a fine job of representing a large scale, difficult to film production.  The sound where i was was very decent too though I felt that the singers were pushed forward a bit unnaturally.  All in all though a very satisfactory effort.

3 thoughts on “Finding the Holy Grail”