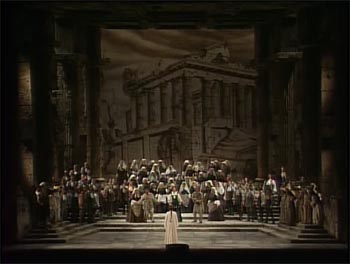 The 1982 Metropolitan Opera recording of Mozart’s Idomeneo will likely please those who like their Mozart on the well done side.  The story telling is straightforward (though there are some design quirks), the orchestra is big, the tempi are not too sprightly and the vocal talent is starry if not especially Mozartian.  To reinforce this James Levine has made a number of cuts and interpolations from different early performances to structure things a bit more like a grand opera and less like a tragédie lyrique. 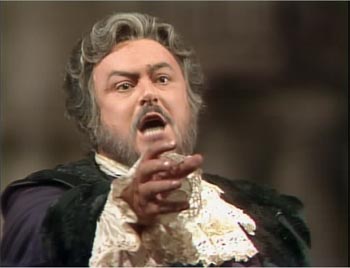 Jean-Pierre Ponelle’s production features a stepped and colonnaded podium behind which the backdrop changes uses drops that look sort of like engravings.  From time to time a stylized “head of Neptune” is worked into the design.  The singers are dressed in a sort of mash up of 18th century and Classical Greece.  It’s all pretty much monochrome and subdued except for Elettra’s bright red “I’m batshit insane” wig.  It’s also quite dark a lot of the time.  Blocking is pretty basic tending to symmetrical arrangements of characters parking and barking.  The acting varies from a succession of stock baroqueish gestures to really quite good. 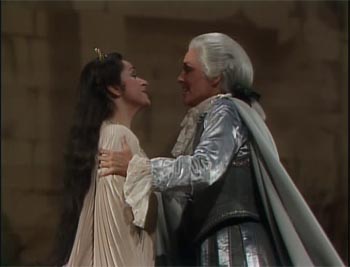 The singing is top notch, if not especially Mozartian.  Luciano Pavarotti in the title role is very loud and rather Italianate but it fits with the overall tone.  Frederica von Stade as Idamante, Ileana Cotrubas as Ilia and Hildegard Behrens as Elettra are all thoroughly competent.  Von Stade is probably the acting stand out and Behrens manages to froth convincingly at the mouth in her big death scene.  The supporting roles and the chorus are all well up to Met standard.  Levine pulls everything together in the rather stolid manner I associate with his Mozart. 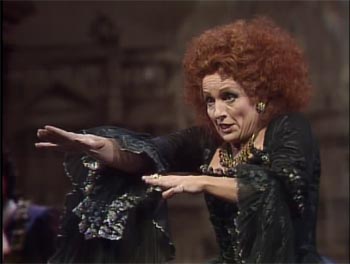 This is a 1980s TV broadcast video directed by Brian Large.  It’s what one expects.  The 4:3 picture isn’t especially good and there are long sequences of close ups.  On my copy, the original Pioneer Classics release,  the Dolby stereo sound is decidedly thin which doesn’t help bring out what Levine is trying to do with the music.  I believe it’s been remastered using DGG’s surround sound synthesis technology and the current release on DGG offers DTS and Dolby 5.1.  Based on other DGG products from this era that could well be a significant improvement.  Subtitles on my version are English only.

For my money, Idomeneo is not Mozart’s most compelling opera and I would much prefer a production that had more to say and a sprightlier approach to the music. I would have to say though that my less than enthusiastic response was not shared by the audience in the house who went completely nuts at several points during the performance.

8 thoughts on “Idomeneo at the Met”