Messiaen’s Saint François d’Assise is an astonishing piece of music theatre and Pierre Audi’s Amsterdam staging of it is equally extraordinary.  There is very little “plot”.  The work consists of eight loosely linked tableaux taken from 16th century accounts of St. Francis’ life and ministry.  There is theology and leprosy and ornithology and it goes on for four and a quarter hours.  It ought not to work but it does.

There’s a very distinct musical structure  Much of the vocal line is unaccompanied and it’s mostly rhythmically monotonous though tonally varied.  The vocal passages are often interleaved with much more rhythmically complex, densely scored orchestral passages.  At other times there is more conventional accompaniment for the singers and/or the chorus.  There is a lot of use of percussion and, besides a large conventional orchestra, three ondes Martenot are in play.  Messiaen uses leitmotivs fairly extensively, especially for Francis and the Angel. There are also some striking bird song transcriptions in tableau six. It’s very compelling and if you are a fan of Messiaen’s music you’ll probably like it a lot.

The libretto is quite abstract and, in some ways, repetitive.  The idea, words and music of J’ai peur, sur la route appear several times and there is recapping of events that sometimes almost seems to match The Ring.  It’s a tribute to the overall power of the piece that a Q and A on Predestination can remain compelling theatre.  There are also moments of high drama.  Francis’ confrontation with the leper and the Stigmata tableau are especially intense.

The staging is striking.  It appears that the stage of Het Muziektheater has been built out over the pit to bring the action closer to the audience.  Various semi-abstract pieces of scenery representing a pile of crosses, a monastery gate, a wood etc are place on platforms on the apron.  The conductor and orchestra are behind the apron in full sight.  Behind them galleries and gantries curl around the rear of the stage providing settings for the chorus and the Angel.  Above everything is a sort of planetarium dome representing the heavens.

Most of the action is played out fairly near the front of the stage.  The austerely dressed friars interact with each other and the various characters who come into play.  There’s a rather striking leper, an Angel who appears incognito and his/her full glory and a band of colourfully dressed children representing the birds that Francis preaches to.  The stage movement is very deliberate and thought out.  Every facial expression and gesture has been thought through.  It’s also supported by a very striking lighting plot by designer Jean Kalman. 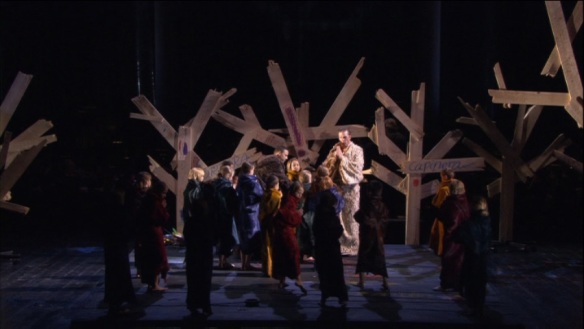 I just can’t fault the performances.  Rod Gilfry, who I have seen little of since his Mozart recordings with Gardiner twenty years ago, is immense. He is on stage for all but maybe thirty minutes of the piece and has a huge and difficult sing.  He never falters.  He is well supported by Hank Neven, Tom Randle, Donald Kaasch, Armand Arapin, Jan Willem Baljet and André Morsch as the other friars.  Hubert Delamboye gives a moving cameo as The Leper and Camilla Tilling sings gorgeously as The Angel.  All of them also act extremely well.  Gilfry’s portrayal of overcoming his repulsion of the leper is remarkable.  The orchestral and choral work is quite excellent (Hague Philharmonic and Chorus of De Nederlandse Opera) and Ingo Metzmacher holds it all together.

The videodirection is by Misjel Vermeiren is interesting and, I think, ultimately succesful.  He uses a very wide variety of camera angles, including directly above the action, but it seems to work.  The total stage set is vast and when he does show it all it shows up the limitations of even a good DVD picture.  On balance I think his choice of angles and depths is judicious.

The Opus Arte disk package is in the luxury class.  There are three DVD9 disks allowing for better than average DVD picture, a very vivid DTS 5.1 soundtrack (LPCM stereo too) and some bonus interview material.  There are English, French, German, Spanish, Italian and Dutch subtitles.  The trilingual booklet has a track listing, Messiaen’s own synopsis and a useful essay by Reiner Moritz.  It’s a shame though that this one didn’t come out on Blu-ray.  The extra visual detail would be welcome and a PCM 5.0 soundtrack for this music would be awesome.

All in all, I suspect it will be a very long time before a more compelling DVD version of this strange but moving piece appears.

I have not shrunk the screencaps on this post so you can click through for a larger image.