Bellini’s Norma is a tale of illicit love between two Gaulish priestesses (can women be called druids?) and a Roman tribune.  In this 2006 production for the Bayerische Staatsoper director Jürgen Rose has set the piece in the present day in a vaguely Middle Eastern setting.  Within that framework the story is told quite straightforwardly and there’s no attempt to project some kind of agenda.  The designs are very striking.  Blue figures a lot.  Norma’s home is an underground bunker.  When the Gauls arm for war they put on ski masks and supplement their spears with assault rifles.  It all looks really good.  The acting is also excellent and we get some real intensity in the Norma/Pollione/Adalgisa love triangle and in the tension between Norma and her father Oroveso.  It works as drama.

The musical values are where this production really scores though.  Edita Gruberova in the title role is pushing 60 here but you would never know it.  She sings with power, perfect bel canto technique and great passion.  This is a truly great performance that defies detailed critique.  One just has to see it and marvel.  Zoran Todorovich is a very loud but very musical Pollione.  I like his voice a lot more when he drops the volume a bit, as he mostly does in the duets and ensembles, to reveal a rather lovely, less baritenorish, quality.  Fine singing too from Sonia Ganassi as Adalgisa and Roberto Scandiuzzi as Oroveso.  The phrasing from conductor Friedrich Haider is limpid and his tempi keep things moving along.  Both orchestra and chorus sound really good.

The video direction is by Brian Large and, a few odd angles aside, I really like it.  Like some of his other more recent efforts he seems to have abandoned the super closeups of earlier in his career.  Here, rightly, we get to see the very carefully composed stage picture, especially in the big chorus scenes.  The picture quality is standard 16:9 DVD.  Sadly there’s no Blu-ray edition and I rather doubt this was filmed in HD.  The DTS 5.0 sound is distinctly good though.  It’s nicely balanced, spacious and detailed and it handles the big moments very well.  Documentation is standard DG; track listing, synopsis and short essay.  The bonus material includes a short, not very interesting, “Making of” documentary and some DG promo material.  There are Chinese, English, French, German, Italian and Spanish subtitles. 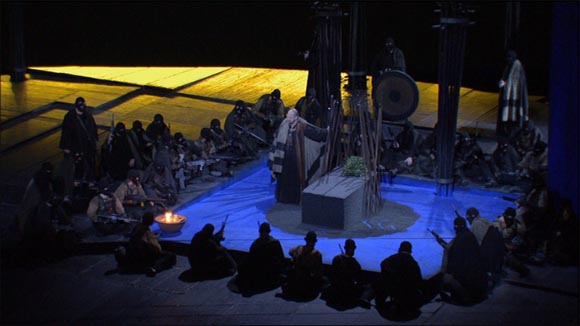 I don’t know whether anything will ever entirely convert me to “serious” bel canto but, if anything could, it would be a production and performance like this.