This is a follow up to yesterday’s review of Martin Kušej’s Salzburg production of Don Giovanni.  What I want to explore here is how Kušej treats issues of collusion, consent and delusion as it applies to sexual relations.

There are some real problems in updating Don Giovanni.  After all, central to the plot is the death in a fight/duel of a man fighting to defend his daughter’s “honour”.  Since the notion that female “honour” is a simple matter of pre-marital chastity and post-marital fidelity makes no sense in the setting Kušej has chosen something else has to be seen to be happening.

So what do we see in Act 1 Scene 1.  It’s quite ambiguous.  Don Giovanni is alone on stage.  He sings the opening four lines of Leporello’s aria Notte e giorno non faticar.  Leporello comes onto stage through a door, doing up his trousers, to pick up the aria.  Don Giovanni puts on a mask and goes off through another door.  Some minutes later Don Giovanni emerges, through the same door Leporello had used, pursued by Donna Anna who is blindfolded with her own scarf.  She, of course, is furious and her cries trigger the scene in which her father is killed but what are we to suppose went on behind those two doors?  First off there’s a degree of implied consent.  Young ladies in bedrooms don’t usualy get blindfolded by accident.  So what else? 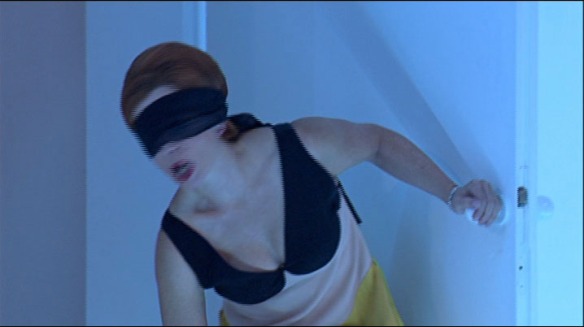 Is Leporello coming away from a kinky sex session with the blindfolded Donna Anna?

Is it the substitution of Don Giovanni for Leporello that has Donna Anna so upset?

If there has been a substitution how does she know?

What else are we to make of the blindfold at this stage because we are going to see a lot more of it?

The blindfold makes it’s next appearance in the confrontation between Don Giovanni and Donna Anna that ends with Leporello singing Madamina, il catalogo  è questo.  Don Giovanni is toying with the blindfold.  It looks like he wants to put it on Donna Elvira but she’s not having any and he quickly drops the idea.  As we are going to see several times, Elvira isn’t rejecting Don Giovanni so what is happening here? 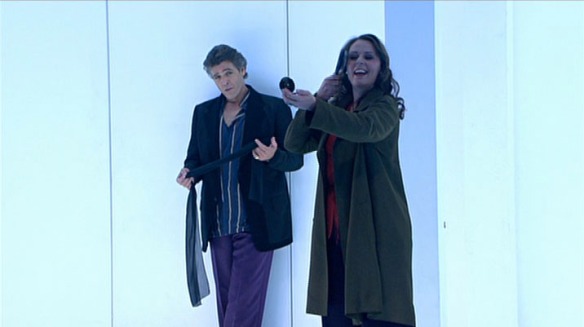 Is Elvira rejecting Don Giovanni’s brand of kinky sex (which presumably was OK before)?

Is Kušej using “kink” vs “non-kink” as a 2ist century metaphor for the 18th century idea of illicit and licit (i.e. marital) sex?

Next up, of course, is Zerlina.  She pretty much makes love to the blindfold for several minutes before finally helping Don Giovanni to put it in place.  At this point Donna Elvira arrives and separates the two; the scarf staying with Don Giovanni.  Just at “Da’ miei tormenti impara a creder a quel cor” he offers her the scarf and she wraps it round her eyes.  It’s pretty clear by now that the scarf stands for “kinky”, transgressive sex which is what Don Giovanni offers and which “nice girls” reject because we are alsoseeing Donna Elvira warning Zerlina off “her man”at least as much as because he is, ipso facto, bad news.  The acting in this scene is really tremendous. 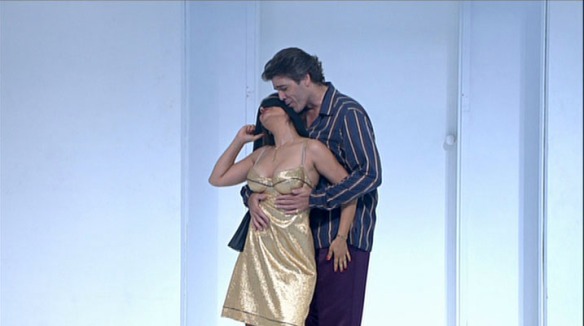 It goes on.  In the next scene where Donna Anna and Don Ottavio encounter Don Giovanni the scarf serves two distinct, almost contradictory purposes.  At the crucial point where Don Giovanni offers his aid in tracking down the murderer he hands Donna Anna the scarf as a token of “his services”.  This, of course, is the moment when she realises who dunnit but there’s clearly more to the device than that.  She explains her reasoning to Don Ottavio completely without reference to the scarf although she’s playing with it throughout and covers her eyes with it.  Don Ottavio buys the “official line” and seems to be the one  who doesn’t understand who and what Don Giovanni is or indeed have any understanding of the games that are being played.  Indeed during Dalla sua pace he seems to be treating it as some sort of holy relic. 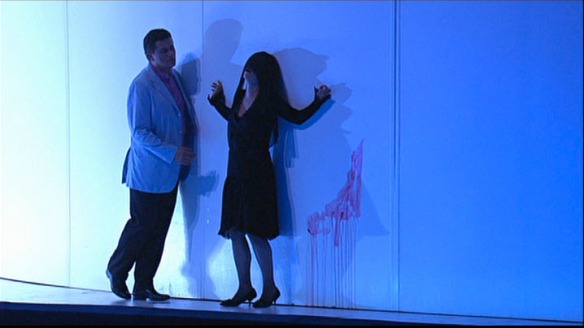 Now we move onto the distinctly ironic.  One might think that Batti, batti would be the most obvious place in the whole opera to introduce elements of BDSM but Kušej isn’t going for the obvious.  He doesn’t entirely avoid it but he is certainly indirect.  At the beginning of the recit that preceded the aria Masetto punches Zerlina in the face but there’s nothing sexual about it.  During the aria Zerlina, of course, offers herself to Masetto but he responds very gently.  However, in the background the underwear clad sisters of Persephone are miming the after effects of violent sex.  The blindfold is nowhere to be seen.  Are we seeing Masetto as the other “innocent” (he may be rough but he’s not kinky) rejecting transgressive sex even when it’s explicitly offered? 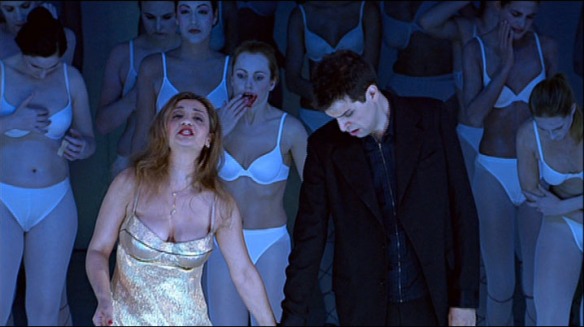 It’s clear at this point that Zerlina has finally figured out Don Giovanni and she isn’t having any.  In the party scene she’s scurrying around the back of the stage hunted, in turn, by Leporello and Don Giovanni.  When Don Giovanni finally catches up with her there’s no hint of seduction, no hint of complicity and no scarf.  A very unwilling Zerlina is carried away by the sisters of Persephone. 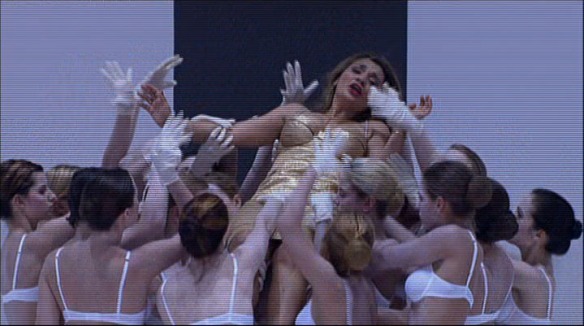 Next up we’ll look at where Kušej takes this in Act 2.