Laurent Pelly’s 2007 production of Donizetti’s La Fille du Régiment was a coproduction of the Royal Opera House, The Metropolitan Opera and the Wiener Staatsoper which one make expect to produce a stodgy snoozefest.  It’s not.  It’s a fast paced, energetic and funny production.  There’s nothing especially cleverly conceptual about it but its well designed, well directed and well played.  If one were to be hyper critical it would be that the humour in Act 2 is rather laid on with a trowel but it’s not too seriously overdone.  The setting is updated from the wars of the first Napoleon to something vaguely WW1 like.  In some ways this doesn’t make a whole lot of sense but it does provide a visual “Frenchness” that’s probably easier for modern audiences and, anyway, the libretto as originally written is about as historically accurate as the average piece of bel canto fluff.  Best not get into serious military history buff territory and get on and enjoy the show.

The DVD version was recorded at the Royal Opera House though the production was also broadcast, with most of the same principals in the Metropolitan Opera Live in HD series.  It’s a great cast.  Much of the action revolves around the Marie of the wonderful Natalie Dessay but there are equally fine performances from Juan Diego Flórez as Tonio, Alessandro Corbelli as Sulpice and the ageless Felicity Palmer as the Marquise de Berkenfeld.  It says something about the comic acting talents of Palmer, Corbelli and Palmer that Flórez is somewhat outshone in that department!  He’s not outshone in the singing department though and he sings all his big numbers splendidly, canonical high Cs and all.  He’s also very touching in a slightly goofy sort of way.  Dessay is a marvel.  Her acting is brilliant and extremely physical; so much so that one almost misses that she is also turning in a brilliant vocal performance with clear as a bell coloratura and beautiful phrasing.  All this while she irons huge piles of laundry, hauls tubs of potatoes or is born aloft by the chorus!  They get great support from the Covent Garden chorus and there’s some sprightly orchestral playing under the baton of Bruno Campanella.

The production has a myriad of inventive touches.  The initial chorus takes place in front of a giant heap of higgledy, piggledy furniture which is wheeled aside to reveal an alpine terrain made up entirely of maps.  The bulk of the Act 1 action takes place on this landscape including a lot of laundry.  Act 2 transports us to the Berkenfield chateau and a chorus of zombie aristocrats.  There’s a bunch of updated dialogue for Dawn French in a mixture of appalling french and almost equally crudely accented English.  It’s not really my thing but the audience lap it up.  As Hortensius (Donald Maxwell) is carried out by the soldiery he utters a plaintive “Zu hilfe, zu hilfe, nun bin ich verloren” which is cute.  Then to cap it all, Tonio arrives to rescue Marie on a tank backed up by the men of the 21st.  To cap things off a giant rooster is projected onto the stage back wall to set the scene for a suitably patriotic finale.  So lots of fun and the silliness doesn’t overwhelm the rather touching story at the heart of the piece. 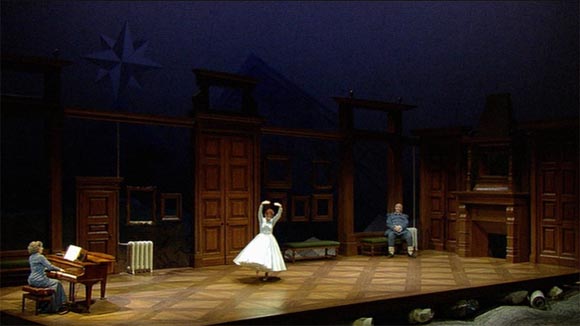 I quite liked Robin Lough’s video direction.  It’s not gimmicky and I think at all times it’s clear what’s going on in the broader picture even when the camera is up close.  The 16:9 picture is modern DVD quality and the DTS 5.1 sound is vivid and exciting.  There are English, French, german, Spanish  and Italian subtitles.  The packaging for DVD is bargain basement.  There’s a very basic leaflet and no extras at all on the disc.

Definitely worth a look especially if you’ve been watching too much Regietheater and need a brain break. 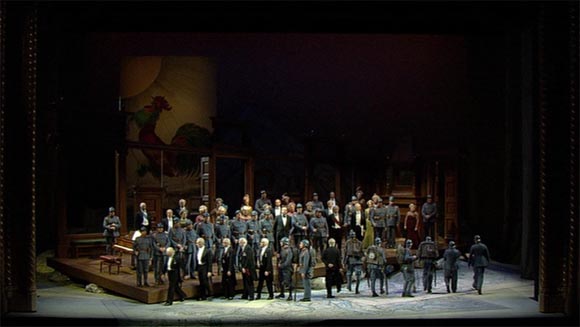