One of the early Metropolitan Opera Live in HD broadcasts was a 2007 showing of Robert Carsen’s 1997 production of Tchaikovsky’s Eugene Onegin with Dmitri Hvorostovsky and Renée Fleming.  It was subsequently released on DVD and Blu-ray by Decca and remains one of the most successful disk releases spawned by the broadcasts. 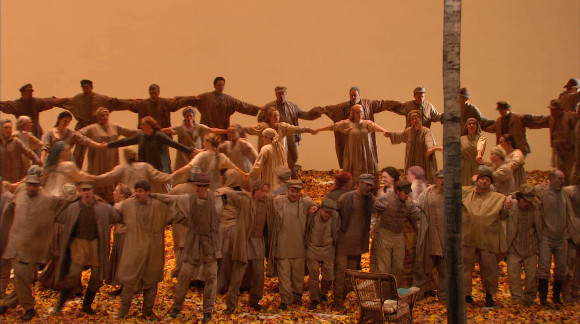 The approach is minimalist.  The enormous Met stage is blocked off by blank walls to form a gigantic open cube within which Carsen deploys a few bits and pieces of props.  It’s the antithesis of the Schenk/Zeffirelli “stuff” aesthetic.  Lighting (Jean Kalman) is used to create quite dramatic shifts of setting and mood.  The opera opens on a stage blank but for a table and a lot of leaves (which in true Carsen style later get swept up by the chorus(1)).  Later the passage of a night in Tatiana’s bedroom is suggested by changing lighting and a rustic ballroom is suggested by two rows of mismatched chairs, in contrast to the later “big city” ballroom where the chairs are opulent and all match.  The space created by this minimalist approach exposes the characters and allows us to focus on their relationships and emotions.  It’s very effective. 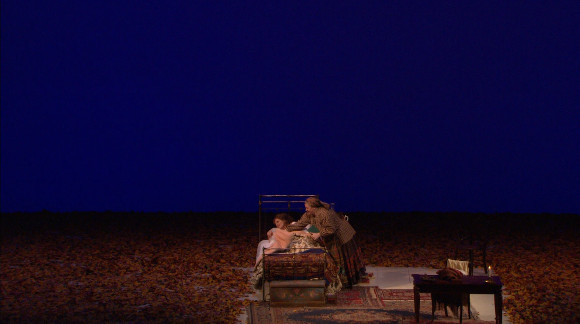 Musically this is a delight.  Both Fleming and Hvorostovsky have gorgeous voices and there is real chemistry between them which maybe explains why this is also one of the best acting performances I have seen from Fleming.  She manages the transition from girlish, naive Tatiana to the poised Princess Gremin entirely convincingly.  Hvorostovsky is equally effective.  It helps that they both look the part (at least as much as singers mature enough to sing these roles could ever look 20ish anyway).  All the back up roles are very good too.  Ramón Vargas is a sympathetic Lenski and produces a very fine version of his Act 2 aria sung from an entirely empty blue stage.  Sergei Aleksashkin is a splendidly bluff, very Russian Gremin and completely convinces as the older man who has, at last, found love.  Nice work from Elena Zeremba as Olga and Larisa Shevchenko as Filippevna.  Valery Gergiev conducts and the orchestra sounds particularly good in the dance numbers.  No complaints about the rest though.

Brian Large directs for video in what must have been one of the last, and best, efforts by him in a career that stretches back to the BBC film of Peter Grimes with Peter Pears. He allows us to get a real sense of the spaciousness of Carsen’s concept and gives a good picture of the crowd action scenes. Naturally, given the nature of the set, he closes up on the singers a lot but not excessively. he does use some odd angles and seems to have a quirky liking for the “rabbit cam” that traverses across the front of the pit. All in all though it’s one of the very best pieces of video direction in the HD series.

The Blu-ray disk has a very fine 1080i picture. Colour is really important in this production and the colours here are rich and vibrant where they need to be. The DTS-HD Master Audio sound is also very good and seems to have a particularly natural balance. The chorus gets especially sympathetic treatment (There’s also a PCM stereo track). Subtitles are English, French, German, Italian, Spanish and Chinese and there’s a trilingual booklet with track listings, synopsis and brief essay. The usual HD interval entertainment is included as a bonus with Mikhail Baryshnikov hosting.

fn1: What is it with Carsen and sweeping things up?  Maybe he could do a Tosca with a snow shovelling scene especially for Adrienne Pieczonka?