Singulières, written by Maxime Beauregard-Martin, is a French language (more or less) coproduction of Le collectif Nous sommes ici, le Théâtre Catapulte and La Bordée.  It'[s currently being presented jointly by Crow’s Theatre and Théâtre français de Toronto at the Streetcar Crowsnest.  It tells the stories of various Québecoises who are stlll single at a certain age.  Women who would once, especially in Quebec, have been referred to as “old maids”. 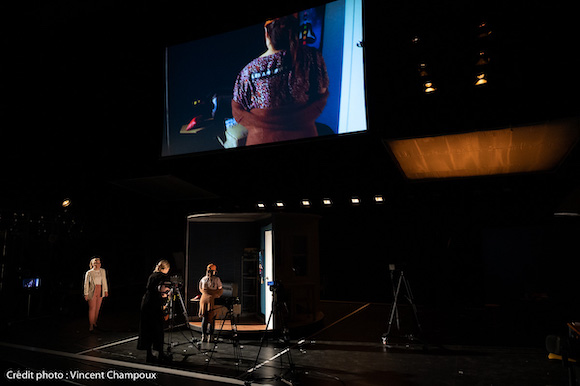 The framing device is that a film maker is making a documentary about such women and so we see both interviews and recorded reflections “live” while they are simultaneously projected onto a screen above the stage; sometimes with “green screen” effects.  This mean that the stage is very busy with people moving cameras around, the actual stage action and so on.  This is an approach I’ve seen on video in various European opera productions but never on a North American stage and never live.  Watching, on video, of course, imposes yet another interpretative lens on the action and it was interesting to experience without that.  As well as the live action video, scene shifts are covered by historical video (at least I assume it’s archival) from the 1960s in which Quebecers of various age and genders are asked whether the concept of the “old maid” is still valid.  I think the purpose of both these devices is essentially Brechtian.  We are constantly reminded that it’s not “real” on many levels. 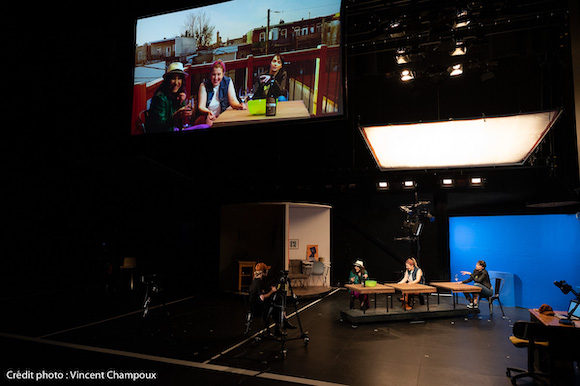 So, we get various characters; some of them stock characters of Québecois film and stage (think Denis Arcand); the randy female academic, the bored civil servant etc and throw in a Jew and a Muslim and a woman who’s trying to adopt a Haitian baby, three working class women who call themselves “les cons”.  It’s a very diverse set of women with diverse views on their “singleness” in contrast with the 1960s character who are all very white, very francophone[1} and who all seem to be attending a St. Catherine’s Day celebration in St. Cécile de Wakefield.

The short “clips” of the various different characters, the general busyness of the stage and screens, the hectic pacing and the dark lighting (tending to red and blue) produce a kind of kaleidoscopic effect which is both disturbing and disorientating but pretty effective at pointing up the contrasts.  It’s also very funny though some of the language may offend the extremely sensitive.

Frédérique Bradet, Savina Figueras, Danielle Le Saux-Farmer, Nadia Girard Eddahia and Sophie Thibeault playing multiple characters are all excellent.  I’m not an expert on different accents/dialects in Quebec but they certainly pulled off some convincing versions of the ones I do know!  Direction by Alexandre Fecteau was extremely crisp.  I think in other hands this might have dragged but it didn’t.  The technical team did a fine job too. 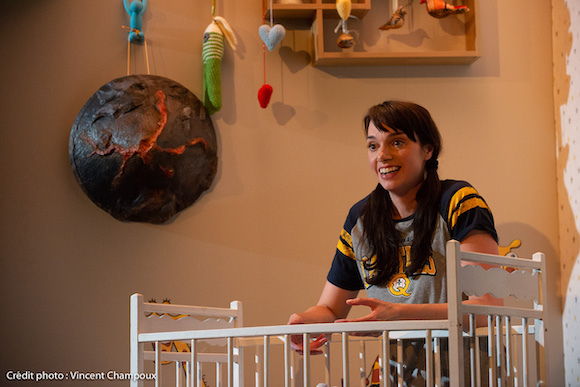 There was an interesting twist with the surtitles.  English text was projected fairly high up either side of the main video screen but there was an alternative of 3D glasses which also displayed the text at the top or bottom of the field of vision as desired.  I tried a pair.  I think it’s a neat idea for someone sitting where surtitles are obscured or involve neck breaking contortions but I found the reflections in the glasses and the weight of them pretty unpleasant and quickly switched to doing without.

All in all it’s an interesting exploration of a not much examined topic; especially in its evolutionary aspects.  It’s clever and it’s funny and the production takes an approach that hasn’t been much seen in Canada.  It’s playing at Crow’s theatre until June 10th.

fn1: As opposed to the often hilarious and often less than polite mix of French and English used by the contemporary characters – anyone who has worked in Montreal will know what I mean.