Last night the TSO gave the last concert of the Decades Project.  Starting, inevitably, with a sesqui, the first half continued with a fine performance of Szymanowski’s Violin Concerto No. 2 with Nicola Benedetti as soloist.  In some ways it’s an odd piece to use to characterise the 1930s (but then so is Carmina Burana!).  It’s high romantic in tone and style.  Lush even.  It’s also extremely well crafted with a rather luscious part for the soloist played quite beautifully by Ms. Benedetti.

After the interval it was Carl Orff’s well known reworking of a bunch of medieval scribblings; the Carmina Burana.  Variously sexually explicit, scatological and just plain daft it is, above all tremendous fun.  It got a fine performance from the orchestra, the Toronto Mendelssohn Choir, the Toronto Children’s Chorus and a trio of soloists.  I was struck by the very precise diction of the gentleman of the choir matched by a very fine, precise performance of the baritone solo part by Philip Addis.  Countertenor Daniel Taylor got a brief but effective squawk as the roasting swan and managed to get in some amusing fooling with Addis as well.  I did rather wonder when soprano Aline Kutan and the children would get a look in as by about the two thirds mark they had had two and a half lines each to sing.  Fortunately it was worth the wait.  Ms. Kutan, who I’ve previously heard in flashy coloratura roles, has high notes of exceptional sweetness and clarity.  I rather wonder why the TSO don’t use her more.  The children, when they finally got a chance, were excellent.  All sections of the TMC sounded apt and the orchestra and conductor Peter Oundjian gave it the full on treatment.  It’s not a subtle piece.  It wasn’t a subtle performance.  Nor should it have been.  Good fun! 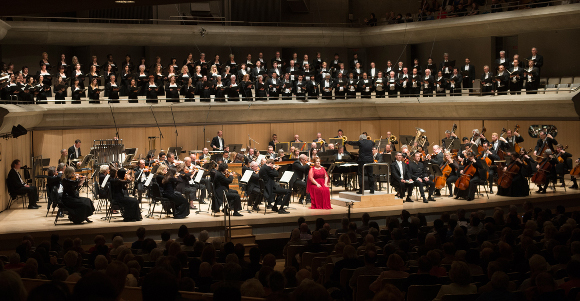