I missed this when I wrote up the Met season this morning but the HD cinema season has been announced too.  The line up includes all four new productions but also repeats of La Bohème and L’elisir d’amore.  Outside of the new stuff there’s nothing exciting but then that’s pretty much the story on stage too.  Here’s the line up.

It’s the new McVicar production which sounds utterly traditional though no doubt we’ll get an over sized axe and a few human sacrifices.  This is one of the shows where both Sondra Radvanovsky and Joyce DiDonato appear which would seem to be the main attraction.  Carlo Rizzi conducts. 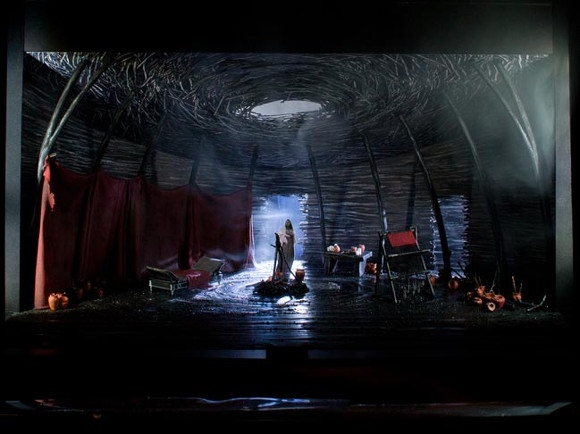 This the Taymor production but unabbreviated and in German.  James Levine conducts.  The cast is decent but overall it’s hard to get excited about.

This is the Adès piece that played at Salzburg in the summer to good reviews.  The composer conducts a pretty decent cast and it’s the only thing at all modern in the HD line up.  Probably the one show I will catch.

Another new McVicar which judging by the stills released so far is about as radical as a vicarage tea party.  Andris Nelsons conducts a cast that includes Kristine Opolais, Jonas Kaufmann and Bryn Terfel.

This is a repeat of the Bartlett Sher “theatre within a theatre” production already released to DVD.  The cast is decent though.  Noon start.  And, despite what the Met website says, I’m pretty sure Hugo von Hofmannsthal wasn’t responsible for the libretto.

Zeffirelli’s antique production gets yet another HD.  The only good news is that Michael Fabiano sings Rodolfo.  12.30 start.

John Copley’s production gets an airing after 25 years in the vaults.  The last time this was done it featured June Anderson, Marilyn Horne, Stanford Olsen and Sam Ramey.  This time the main attractions are Angela Meade and Liz DeShong.

Another new production, this time by Phelim McDermott.  I hate to knock a fellow Mancunian but this is the guy who perpetrated The Enchanted Island.  With a setting on 1950s Coney Island I rather fear this will be another limp attempt by the Met to get with the times.

This is a revival of the 2001 production of which Variety said “The reliable, unruffling Elijah Moshinsky has come up with a naturalistic production awash in shades of gray and muddy brown”.  You have been warned.  The “attraction” here is Placido Domingo in the latest leg of “collect all the Verdi baritone roles”.  12.30 show time.

Laurent Pelly’s Covent Garden production with Joyce DiDonato.  It’s a good production but it’s been out on DVD with Joyce in that too for a while now.  I also think the ROH supporting cast looks better.  Might as well buy the DVD.

All show times 12.55 unless otherwise indicated.