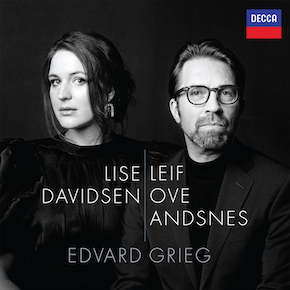 If one is a young Norwegian singer or collaborative pianist Greig’s songs offer a particular challenge.  It’s music that one grows up with and the canonical recordings will be familiar.  It’s a particular challenge too because, in some ways, Grieg’s approach to song is very modern.  In particular, his approach to the piano part is quite different from classical German lieder.  The piano rarely accompanies the singer.  Its role is independent and often seems primary.  Finding an approach that works then for both singer and pianist is non-trivial.  Certainly treating the works as “vocal showpieces” won’t work as it would completely unbalance the music.

I was especially interested to see how soprano Lise Davidsen and her collaborator Leif Ove Andsnes would approach this music in their recently released CD titled simply Edvard Grieg.  Davidsen has a very beautiful voice but it’s big.  I’ve heard her, both live and in recordings, with orchestra and was really curious to see how she would deal with much more intimate music.  Perhaps unsurprisingly, the answer is very well indeed.  She’s very subtle most of the time though quite capable of producing drama when (rarely) appropriate.  It reminds me of hearing Franz-Josef Selig up close and personal in the RBA.  She also has a lovely range of colours from really dark (apparently she started life as a mezzo) to light and bright and she has terrific control of dynamics.  Being a native Norwegian speaker doesn’t do any harm either.  Andsnes is equally impressive.  He’s definitely not playing second fiddle and is appropriately assertive when he needs to be.

So what of the music itself?  There are 28 tracks on the CD providing a very generous 80 minutes of music.  First up and crucially is Haugtussa (The Mountain Maid).  It’s Greig’s only narrative song cycle and for Norwegians is Die Schöne Müllerin and Winterreise rolled into one.  It’s very much an exercise in Norwegian cultural nationalism.  The tale of the maid and her lover is a kind of rural idyll, where the “rural” could only be Nordic, infused with the sort of “mysticism” that still half (at least) believes that there is a troll under the next bridge.  It’s also in Landsmål (nowadays known as Nynorsk); a dialect based Norwegian created in opposition to more formal Danish derived Norwegian.  Obviously there’s a narrative arc but the mood of the eight songs is varied.  There is elegy, there is darkness but there’s also playfulness and humour.  Davidsen and Andsnes skilfully navigate these varied moods.

The other substantial Norwegian set on the CD is Digte (Poems) Op.69 where all five songs are given.  These range from the dramatic and sinister to the very funny (advice to a snail).  There are also a bunch of selections from other settings of Norwegian poems including, we are told, the ones that are practically compulsory in a Grieg recital.  There is also the Lieder Op.48 which sets six German poems.  Here we are, textually at least, in more familiar territory with roses, dreams and the inevitable Nachtgall.

The recording was made last September in the Stormen Konserthus, Bodø, Norway.  It’s very good indeed.  The standard CD release is 44.1kHz/16 bit but a digital hi-res (96kHz/24 bit) is available.  The difference is pretty small but I think the overtones on the piano come over a tad better on the hi-res version.  The standard res version though is clear and well balanced with a very natural sound.  The booklet has informative notes and full texts and translations.

This is a very worthwhile release.  It’s music that any art song lover should explore and it’s beautifully performed and recorded.

1 thought on “Davidsen and Andsnes do Greig”