There were, of course, many Beethoven 250 events planned for 2020 and few of them happened.  One, planned for Vienna, was to stage all three versions of Beethoven’s only opera; Leonore (1805), Fidelio (1806) and the final form that modern audiences mostly know, Fidelio (1814).  As far as I know the only one that went ahead was a production of the 1806 version at the Theater an der Wien that was filmed in an empty house and has just got a release on Blu-ray and DVD.  Now, it happens that the 1805 Leonore was staged and recorded by Lafayette Opera in New York the year before.  So we can look at all three versions and the evolution of the piece despite the Vienna cancellations.  For those who want more details on the New York production, it was reviewed by Patrick Dillon in the summer 2020 edition of Opera Canada and there will be a review, by myself, of the recording in a future edition (probably soon). The first thing that strikes me about the three operas is that I’m puzzled that Beethoven took such weak material as his starting point.  The principal source is Jean-Nicolas Brouilly’s Léonore, ou L’Amour conjugal with music by Pierre Gaveaux.  (This too has been recorded by Opera Lafayette).  To me it feels like two rather different pieces stitched together; a sort of comedic love triangle followed by a rather heavy handed fable of conjugal fidelity.  This is reinforced by being in three acts; of which the first consists largely of the love triangle elements; the interval between Acts 1 and 2 serving to heighten the sense of unconnectedness.  Beethoven’s 1805 piece follows it pretty closely and is also written in a more decorative, less heroic style, than one is accustomed to from the 1814 Fidelio.  Suffice it say, I’m not a huge fan of Leonore. The 1806 remount tightens things up quite a bit.  Several numbers and some dialogue are cut and the finale is substantially rewritten and, of course, the first two acts are run together to give the structure carried over into the final version.  Also, the music is simplified in places with some coloratura runs etc cut.  In fact the 1806 Act 1 remains pretty much unchanged in the final version.  The only further changes appear to be that the first two numbers are swapped and there are more revisions to the finale.  The 1806 version  also has changes early in new Act 2 where the opening scene is shortened and tightened up.  These changes are carried over into the 1814 version.  The biggest changes though are in the finale where there is actually some rationale for Pizarro’s escape and much of the philosophising about Pizarro’s future fate is cut.  What doesn’t happen is the genius final change for 1814; moving the finale out into the open air and adding the prisoners’ ode to freedom.  The universality that emerges as perhaps the greatest feature of the final version is thus missing and it remains, fundamentally, a story of conjugal constancy; albeit shorn of some of the incongruous comic elements of Leonore. So now turning to the realisation of the 1806 version at the Theater an der Wien, the first thing one has to say is that it’s severely abstract.  It’s directed by the film and stage actor Christoph Waltz and he and his design team have opted for a single set made up of intersecting flights of steps giving an overall effect of an MC Escher drawing.  The characters all wear something akin to a Mao suit in shades of grey.  In fact there are lots of shades of grey.  Some of the time too (beginning of Act 2) it’s almost impossibly dark.  Only right at the end, where the lighting makes a sort of transition from dark to light is there briefly some colour before that, too is overwhelmed by saturating radiance. Against this austere background there is careful Personenregie backed up by good acting and excellent singing.  Nicole Chevalier is a powerful enough voice in the title role and acts really nicely.  Her “Komm Hoffnung” is really very touching.  She also duets well with the excellent Eric Cutler as Florestan and “O namenlose Freude” is suitably ecstatic.  Christof Fischesser is a convincing Rocco; neither heroic nor overly servile and he interacts well with Gabor Bretz’ Pizarro who largely eschews moustache twirling but is unpleasant enough.  Mélissa Petit is rather appealing as Marzelline; acting with spirit and singing accurately and pleasantly.  Károly Szemerédy is fine as Don Fernando although he looks weirdly like Dr. No in the Bond film. It’s the Wiener Symphoniker in the pit and at times they seem like the star of the show.  There’s some truly fine playing both as an ensemble and in the solos from some of the principals.  Much of that, of course, is due to conductor Manfred Honeck who is excellent throughout.  The chorus is the always reliable Arnold Schoenberg Chor. Video direction is by Felix Breisach and he’s fine.  To be honest he won’t get many easier to film productions than this (apart from the first few minutes of Act 2).  Video quality on Blu-ray is excellent though taxed of course in the very dark scene.  Both PCM stereo and DTS-HD-MA surround tracks are clear, well balanced and show off the orchestra well.  The only extras are trailers and the documentation is pretty basic; track listing, brief synopsis and a brief description of the circumstances of the recording.  Subtitle options are English, German, French, Korean and Japanese. I can’t imagine that many people will prefer this 1806 version of Fidelio to the more familiar 1814 one and there are lots of good recordings of that available.  I do find it more watchable and listenable though than the 1805 Leonore and fans of Fidelio may think this worth a look.. 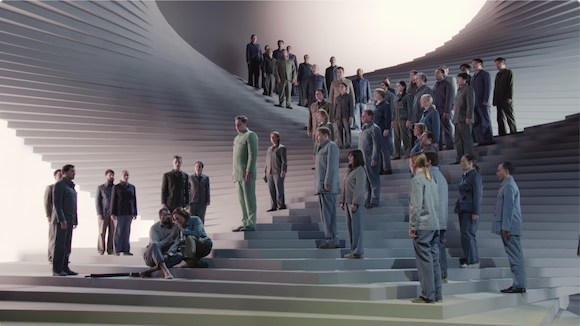