Last night’s performers were mezzo-soprano Laurie Rubin, blind since birth, and pianist Liz Upchurch, also visually impaired, but before they came on there was an unusually thought provoking and non formulaic land acknowledgement by Smith Purdy.  The performance was a mix of art songs, some Bach from Liz, anecdotes and thoughts drawn from Laurie’s poetry.

The music ranged from Copland’s setting of Dickinson’s There Came a Wind Like a Bugle through Fauré and Brahms to a truly bravura account Rossini’s Non più mesta; a piece Laurie sang in her first major stage role; the title role in La Cenerentola.  Along the way was a lovely account of Mahler’s Liebst du um Schönheit and a thought provoking choice of Rodgers and Hammerstein’s You’ll Never Walk Alone which sounds very different in a recital like this than it ever did at Anfield.  Normally I’d be racking my brain to say something musicological at this juncture but really that’s not the point.

Between songs we got some funny anecdotes of navigating New York with a scary guide dog.  How Laurie has worked with directors to make stage performances possible.  What “colour” can mean to someone with no functional retinal cells and, from Liz, coping with a “chaotic” eye (I can relate to that!).  Running through all this though was a very serious current of “I want to be recognised for what I can do rather than what I can’t”.

The evening wrapped up with a panel discussion/Q&A where Laurie and Liz were joined by Rod Michalko; an author and academic, and Devon Healy, an actress and recently minted PhD.  Both of them, of course, are blind.  Here we covered topics like how directors/casting agent, even when they want a blind person, want their stereotype of a blind person rather than an actually existing one.  Devon had an anecdote of a director telling her that “no blind person would move like that”.  Also how organisations do or don’t accommodate visual impairment including assuming that sighted people know best how to do it rather than asking what might actually help.  It sounds deadly serious and, in a way it was, but it was also funny and collegial and rather uplifting. 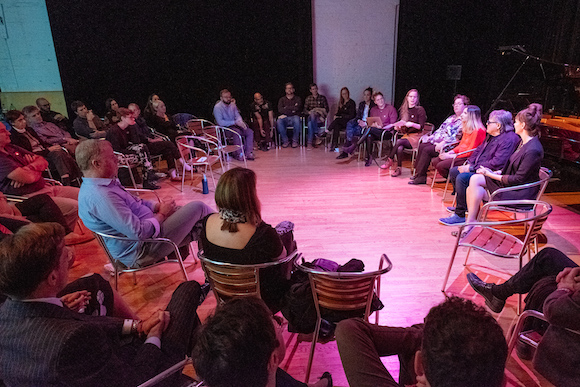 My main take aways from the night (which I suspect will be echoed tonight and tomorrow); let’s celebrate and value people for what they have to give, not what they don’t, and let’s focus on what unites us as humans, not what divides us.

There are two more shows in the series: