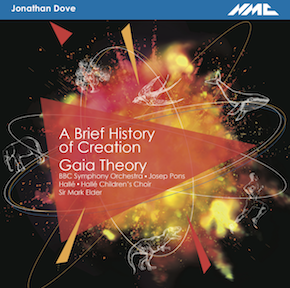 That headline is taken from the eighth movement of Jonathan Dove’s 2016 work for orchestra and children’s chorus; A Brief History of Creation, which takes us in thirteen movements from the stars to man via, inter alia, rain, sharks, whales and monkeys.  The text, by Alasdair Middleton, is clever, engaging and singable.  The music is eclectic.  There are elements of atonality but also intense lyricism.  It’s by turns shimmery, frantic, doom laden and meditative.  It engages beautifully with the text and Dove has a very sure sense of what is and is not reasonable to ask of a children’s choir.  Some short text sections are left as spoken (with a very authentic Mancunian accent).  All in all, it’s a witty and enjoyable piece that doesn’t outstay it’s 45 minutes or so.

The recording is a live recording of the work’s premier with Sir Mark Elder conducting the Hallé and the excellent Hallé Children’s Choir (hence the Manc accents).  It’s hard to see it getting a better performance or a better recording, which is bright, open and crystal clear with the texts clearly audible.  There’s some really good work from the orchestra, especially the winds and percussion and the choir handles even the most challenging parts of the score with apparent ease.

The companion piece on the disk is Dove’s Gaia Theory; an orchestral work commissioned for the 2014 Proms.  The recording is the original BBC Radio 3 broadcast with the BBC Symphony under Joseph Pons.  It’s an interesting piece in three movements.  I think the minimalist elements present in the first work are more prominent here but it’s not the polite minimalism of Philip Glass.  It’s quite raucous.  Some of it reminds me of John Adams at his most energetic, other bits of Steve Reich.  But it’s very much 100% Dove and well worth listening too.