This recording of Mozart’s Le nozze di Figaro was made in 2004 and released on DVD, which won a Grammy.  It’s now been remastered and released on Blu-ray.  It was recorded at the Théâtre des Champs Elysées in Paris and directed by Jean-Louis Martinoty.  The production is visually attractive and well thought out but not concept driven in any way.  The sets are largely made up of 16th century paintings while the costumes are the operatic version of the 17th or maybe 18th century; low necklines, full skirts, breeches etc.  There are a few interesting touches.  Act 3 is set in the count’s curio room with dead reptiles, skulls and so on and it seems somehow to provoke extreme nostalgia in the countess during Dove sono.  For the most part it’s a highly competent, well paced effort though with nothing new or different to say. 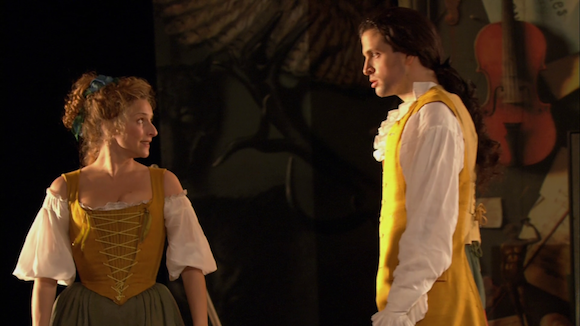 It’s the music making that’s pretty remarkable.  It’s very strongly cast with some interesting contrasts in voice.  The count is Pietro Spagnoli who has a very Italianate lyric baritone which contrasts rather nicely with Luca Pisaroni’s Figaro, which is dark and very much at the bass end of bass-baritone.  Rosemary Joshua is a pretty classic sounding Susanna but Annette Dasch looks and sounds much younger than most countesses.  There’s a real sense of Rosina there.  She also sings quite beautifully and with some technical skill.  For example, the rarely observed repeat in Dove sono is ornamented with taste and skill.  All the more remarkable as part of the time she seems to be playing hopscotch.  Angelika Kirchschlager makes a convincing Cherubino who doesn’t sound at all like the sopranos.  All the minor roles are strongly cast with a particularly fine Barbarina in Pauline Courtin.

René Jacobs conducts with Concerto Köln as orchestra.  Tempi are decidedly fast.  Even with the Dove sono repeat and both Marcellina’s and Basilio’s Act 4 arias included it comes in right on the three hour mark.  Harnoncourt takes 20 minutes longer with less music.  It feels right though with the period instruments helping make the texture seem appropriately light.  Klemperer fans might not appreciate it though.

Pierre Barré directs for video and it’s an undistracting approach.  I could have used to see the whole stage more often than we do but it’s not bad at all.  On Blu-ray the picture is top notch and the DTS HD-MA sound track is exceptionally detailed.  The stereo track though seemed to have pre-echo in places though I doubt whether this would be noticeable except on very good headphones.  There are no extras and the booklet offers a track listing, a synopsis and very short and not very helpful director’s notes.  Subtitles are Italian, French, English, German,Spanish, Korean and Japanese. 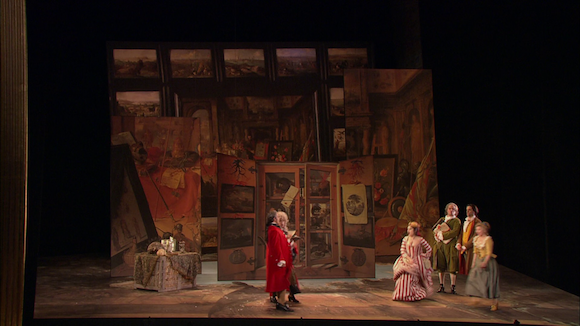 There are many good video recordings of this work but this stands out for its musical values and technical excellence.  For those wanting a “Konzeptfrei” Figaro it may be the best bet currently available.

1 thought on “Brisk and attractive Figaro”