Stefan Herheim’s 2012 production of Dvořák’s Rusalka for Brussels’ La Monnaie Theatre is predictably ambitious and complex.  He takes an explicitly Freudian (by way of Lacan) view of the piece(*).  The female characters are representations of male views of the female and, sometimes it seems, vice versa.  It’s seen most clearly in Act 2 and I found unpacking Act 1 much easier after seeing it so I’m going to start there.  We open not with bucolic, if coarse, peasants preparing for a wedding feast.  We are on a street in a scruffy part of, I guess, Brussels.  The gamekeeper and kitchen boy are replaced by a priest and a policeman.  The traditional dismembered game animals become a female chorus, many of them nuns, with exaggerated secondary sexual characteristics.  There is, essentially, an orgy.  Clearly the human world that Rusalka cannot enter is about sex in its most physical aspects not meaty Central European banquet platters!  Rusalka and the Foreign Princess are dressed and wigged identically.  They are quite freely interchanged.  Lines that are canonically addressed to one are addressed to the other and so forth.  It’s pretty clear that each represents, albeit imperfectly, the Prince’s ideal woman.  Rusalka is the unattainable feminine ideal; flawed in that she cannot engage in fully satisfying sexual activity.  The foreign Princess is sexually satisfying but falls short precisely by not being unattainable.  Some less clear male duality is suggested by the appearance of the Vodnik dressed as the Prince.  It just gets weirder from there with the ballet of nuns, prostitutes, fish, squid and heaven knows what else spilling over into the auditorium while the Prince and Foreign Princess watch from a box and Rusalka and the Vodnik get caught up in the action.  At the conclusion of the act it’s Rusalka not the Princess that he begs for help. 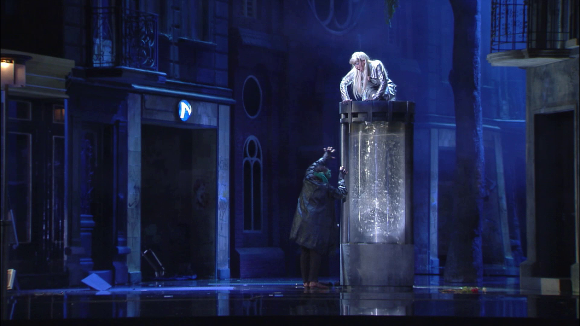 And so to back track to Act 1.  We are in the hyper realistic street.  There is a scruffy bar, a sex shop, the entrance to a Metro station, a church and a block of walk up apartments.  This is the decidedly scruffy end of town.  It is raining.  The water sprites appear to be bar girls.  When they “interact” with their customers the set goes all kinetic including bouncing blow up dolls in the sex shop window. Ježibaba is a bag lady living in the entrance to the Metro.  The Vodnik appears to be a respectable bourgeois but he’s mobbed by the bar girls, to the disgust of his wife watching from their balcony (she will later show up as the Foreign Princess).  The chorus is nightmarish.  Rusalka appears in a silver suit and heels which she gives to Ježibaba as the price of the spell.  Various watery things happen on or in a sort of pillar of water that appears from the pavement.  The Prince when he finally appears, heralded by a stoner Huntsman, is a sailor; apparently of somewhat higher rank than the ones cavorting with the bar girls.  The Vodnik throws an exploding TV set into the street (A Berenice’s potato in my book).  The scene dissolves into a nightmarish orgy of brides, sex dolls and bar girls.  Clearly the subconscious is a chaotic and dangerous place. 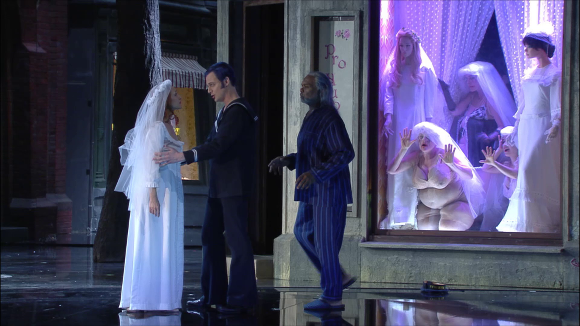 The denouement of Rusalka is always hard to pull off because even the canonically story relies far too much on coincidence and implausible super-natural interventions.  Herheim deals by continuing his treatment of the principal male and female characters as aspects of the same archetypal person.  So we open with Rusalka singing to the Vodnik not the Prince.  Rusalka and Ježibaba are now identically dressed in off the shoulder dresses of silvery scales and they taunt the Vodnik.  There’s a lot of stabbing but no blood until Rusalka appears from the apartment dressed in the white night dress of Act 2 but covered in blood. She gives the knife to the Vodnik who goes into the apartment and stabs his wife (the Foreign Princess).The chorus reappear as nightmarish nuns and mob Rusalka.  She is returned to the watery pillar. The water sprites appear dressed like Rusalka and the Princess.  The Vodnik goes after them with an axe.  The scene dissolves into a much more watery world in which sprites swim and there is a lot of weed.  The Prince appears and he and Rusalka sing out their scene of explanation/expiation/reconciliation???  At the conclusion they embrace and are apparently consumed in some sort of aquatic Aurora Borealis and we are back on the street.  It’s a crime scene now.  The Vodnik is being led away in handcuffs and the body of his wife recovered.  Rusalka appears back in her silver suit and sings to the dead woman and then she’s back to tempting mortals.  Nothing has happened.  Nothing has changed.  Probably! 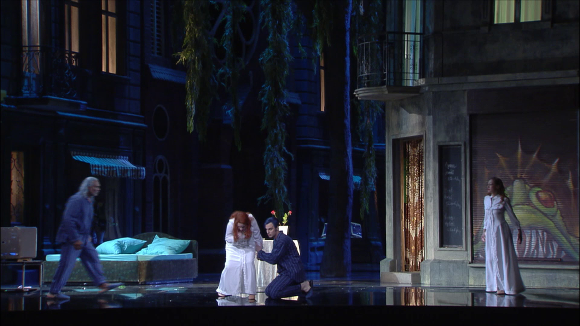 If you have read this far you probably aren’t the type of person who would casually dismiss such a production.  It’s difficult but thought provoking.  Visually spectacular at times.  Baffling at times.  But, I think, worth the effort. 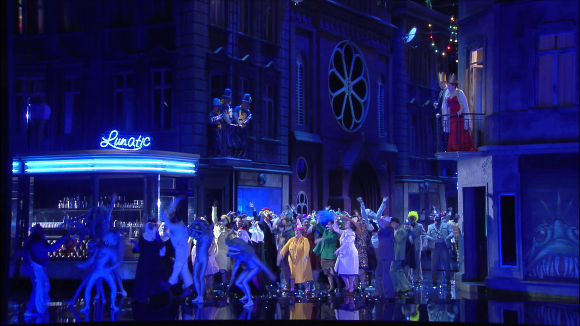 The performances are interesting too.  I don’t think this is the best sung Rusalka on disk, especially in the title role.  If you are looking for the ultimate in creamy tone and floaty high notes in the big numbers it would have to be said that Renée Fleming, caught in her prime in Paris in 2002, is clearly superior but Myrtó Papatanasu is very good and her acting is superb.  Willard White is super solid in both departments as the Vodnik and Renée Morloc is a convincing Ježibaba.  I found Pavel Cernoch a bit anonymous as the Prince but that may be the production as much as anything.  Annalena Persson’s Foreign Princess is also solid across the board.  More than adequate performances in the smaller roles add up to a good ensemble performance.  Ádám Fischer shows good pacing and a feel for the lyricism of the music.  The chorus are terrific, especially the ladies who have a lot to do.  Overall one gets the impression that, for better or worse, the whole gang bought into Herheim’s concept and worked effectively together to pull it off. 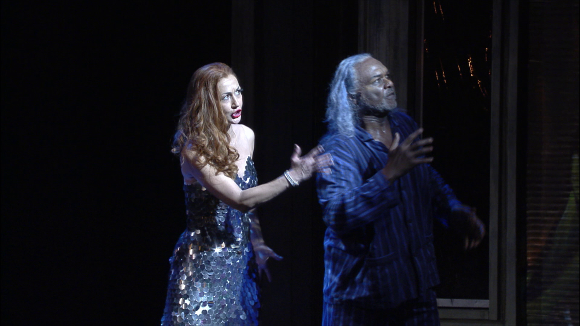 Willy Vanduren directed the film and I think captures it fairly.  That’s no mean feat.  There is a lot going on.  On Blu-ray, the DTS-HD sound and HD picture are top notch.  There are ten minutes or so of interviews included as a bonus.  It’s worth watching them before seeing the show.  The booklet includes a couple of essays, a synopsis and a track listing.  Curiously both synopsis and track listing are entirely canonical and so not terribly helpful in following this production!  Subtitle options are English, German, French, Dutch and Korean.

It’s hard to know where to position this release in relation to the rest of the catalogue.  It’s obviously not for the traditionally inclined but then neither is Martin Kušej’s production at BSO.  Carsen’s elegant take is very good indeed and it’s technically very good for a 2002 recording, if not quite up to the highest modern standards.  No doubt Mary Zimmermann’s up coming Met production will make it to disk eventually and that’s pretty much sure to be a safe bet for those wanting a conventional fairy tale. 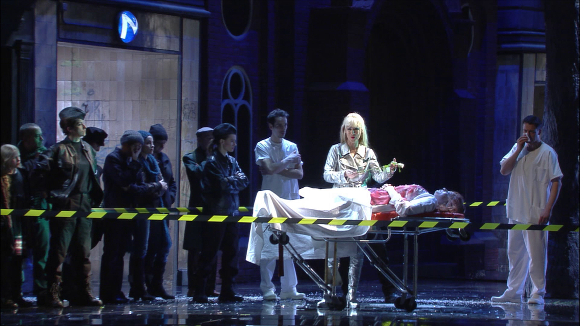 *If you are not familiar with the canonical story, and if you are not this review won’t make much sense, it’s to be found here.